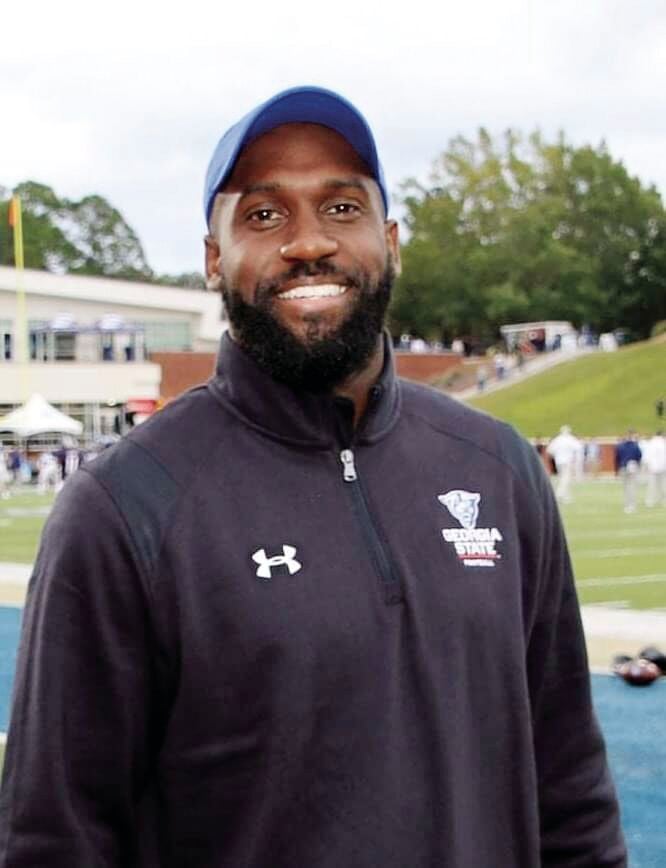 Darius Eubanks is the safeties coach at GSU. 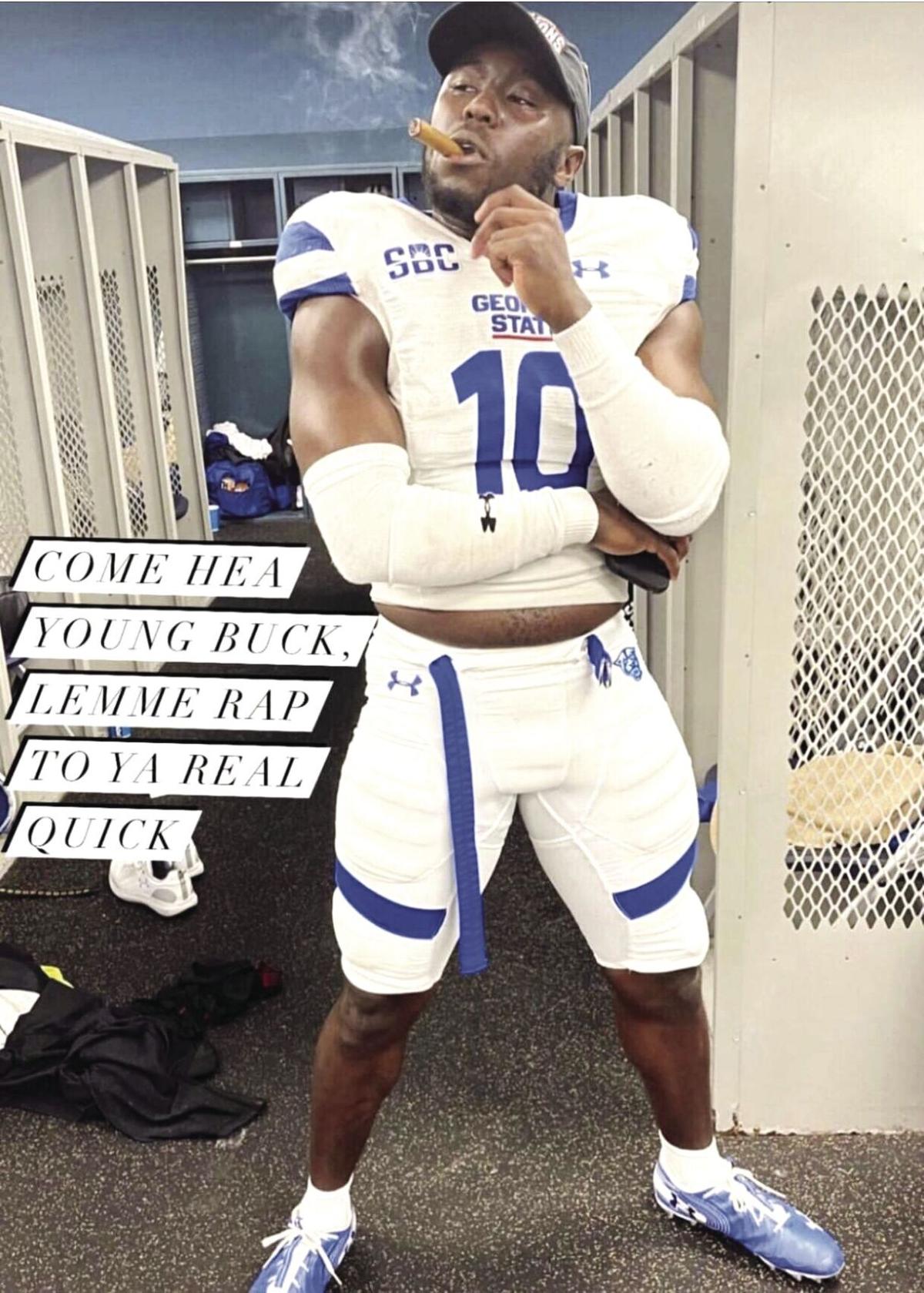 Jacorey Crawford was a safety during his time at THS, but later moved to linebacker at GSU. 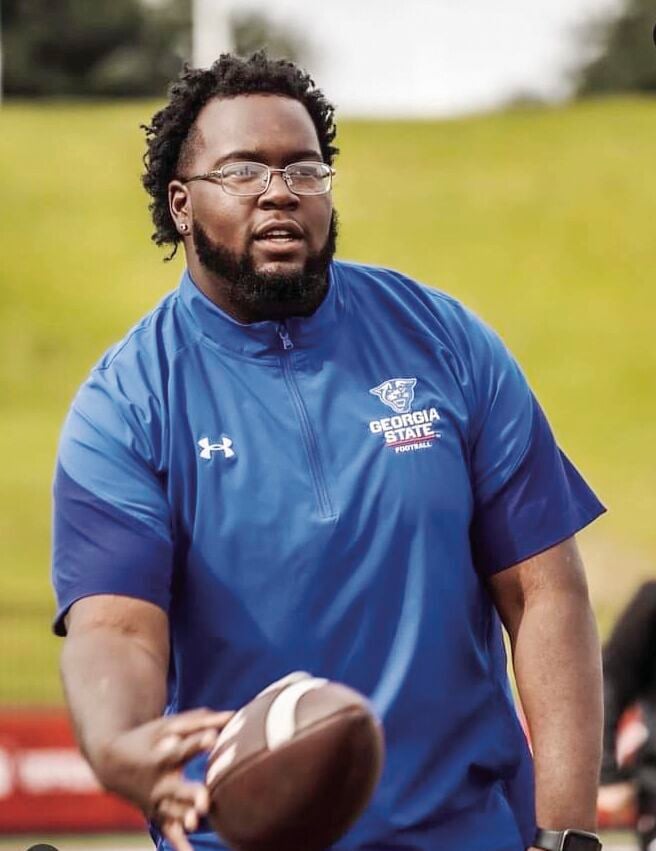 2019 THS graduate Cam Bentley is an equipment manager for the Panthers.

Darius Eubanks is the safeties coach at GSU.

Jacorey Crawford was a safety during his time at THS, but later moved to linebacker at GSU.

2019 THS graduate Cam Bentley is an equipment manager for the Panthers.

Darius Eubanks, THS class of 2009 and GSU safeties coach; Cam Bentley, class of 2019 and GSU head equipment manager for football and basketball; and Jacorey Crawford, class of 2018 and GSU outside linebacker, all traveled with GSU to Montgomery on Dec. 25 for the bowl game.

"This year has been different from the rest because once we got our momentum rolling, it was no stopping the Panthers," Bentley said. "The season didn’t start off the way we wanted or expected, but the team persevered and played with a true purpose and finished the season winning seven out of our last eight games. In addition, the Georgia State Equipment team competed in a Sun Belt 7 on 7 tournament, in which I served as an eligible center, as we competed on certain game days with participating conferences' opponents. We finished the season with a conference-best 5-1 record and Sun Belt Champions."

Bentley also served as an equipment manager at THS, and some of his fondest memories from his time at Thomson include going to the state championship his sophomore year, being named Mr. THS as well as Most Outstanding Male Student and being the student body co-president his senior year.

Bentley said he wants to thank THS head coach Michael Youngblood because he helped him have the ability to become the equipment manager at GSU.

"In his first week as head coach in Thomson, he told me to let him know where I was going to college, and if I wanted to continue doing this, he would try and connect me with the right people," Bentley said. "Three years later, I now serve in a leadership role within the program, being in charge of operations while at practice, with what began as a 15-man crew."

Bentley said he has been able to travel the country from Tennessee to Arizona. He will be going into his fourth year next year, and he is majoring in middle level education with concentrations in math and social studies.

"My future plans are to complete my final season while student teaching full time and preparing myself to become an outstanding educator in just over a year," Bentley said.

"One bad decision can change the course of your life and jeopardize everything you’ve been working for," Bentley said. "Stay focused, do your school work, and if you play sports, go to camps!"

Eubanks has served as the safeties coach at GSU for six months. At THS, he played football, basketball and ran track, lettering in all three sports. Eubanks said some of his favorite memories from THS include "being with the fellas."

"Outside of sports, I'm still close to all my friends, and they are all doing well," Eubanks said. "Becoming husbands and wives, fathers and mothers. They are doing great. Being a coach now is kind of funny, talking like coach Welsh, cool T and Coach Curtis Williams and Willie Williams."

Eubanks graduated from Georgia Southern in 2013, playing football there, before going undrafted, originally as safety and then moving to linebacker. He played for three years in the NFL for various teams before becoming a graduate assistant coach at University of Arkansas in 2017. He is also working on his Masters degree from Arkansas online.

Eubanks got his first coaching job at Samford University, a FCS school in Alabama, and has now moved to a NCAA D1 school in GSU over the past year.

"This past year on my coaching journey has been a long year," Eubanks said. "I was actually at Samford this past spring. Due to Covid we didn’t have a fall season in 2020. I went to Western Carolina University in the summertime. Then I got offered a job at GA State and this season has been great. We finished the season 8-5. Even the equipment people and the recruiting departments have done their job. 2021 was long and was great, but I wouldn’t change it for the world. I am very fortunate, and I'm very grateful."

Eubanks said he eventually wants to become a defensive coordinator.

"I want to make sure I am doing a great job wherever I'm at," Eubanks said. '"Stay prayed up and continue to work. Faith without works is dead. I want to thank the city. I have had a great support system from people back in Thomson. You can always represent your last name, university and your hometown. I hope over the years I have represented Thomson well."

Jacorey Crawford plays outside linebacker for GSU. He played football and ran track and field while at THS.

He said his favorite memories are Friday nights and being around his friends. Crawford has been at GSU for four years, majoring in sports administration.

"It has been a great experience, and I have had the opportunity to play and grow with a lot of people along the way," Crawford said. "It has really been a great source of life long connections and relationships."

Crawford said this season for GSU started out slowly with a 1-5 record and many players leaving for the transfer portal.

"Early on in the season, our record was terrible," Crawford said. "Starting the first half of the season 1-5 definitely took a toll on the morale of the team. The only thing that kept us going was each other. Despite our record, we continued to enjoy each other’s company, made a few depth chart changes and we won our last seven out of eight games. It was a real triumph through the second half of the season."

He said it felt good to win the Camellia Bowl, but the goal is to win the conference. He added that they were one win away from that goal.