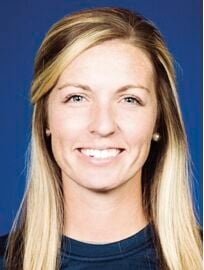 Coach Mary Beth Dennison, shown in a current photo, has accepted a job with Georgia Southern. 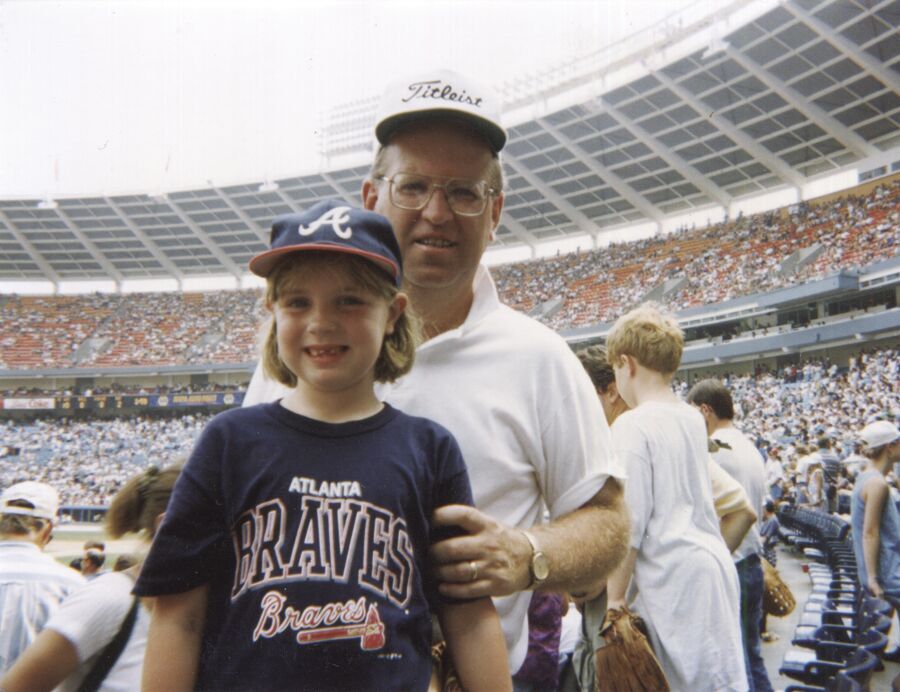 Ben Blasingame is shown with daughter Mary Beth years ago at an Atlanta Braves game. 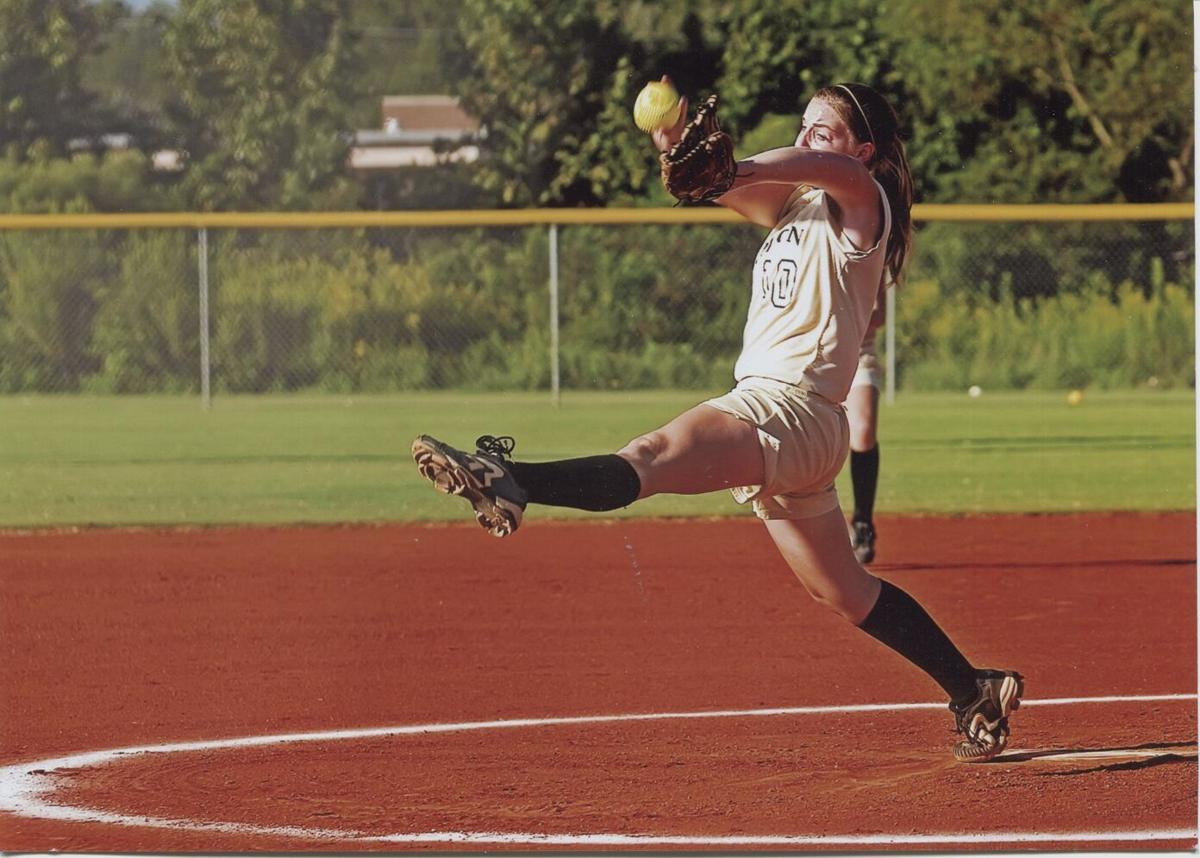 Mary Beth Dennsion, then known by her maiden name of Blasingame, takes aim on the plate while playing for Thomson High School.

Coach Mary Beth Dennison, shown in a current photo, has accepted a job with Georgia Southern.

Ben Blasingame is shown with daughter Mary Beth years ago at an Atlanta Braves game.

Mary Beth Dennsion, then known by her maiden name of Blasingame, takes aim on the plate while playing for Thomson High School.

For Mary Beth Dennison, the path from Thomson to Statesboro has taken her many places, including the University of Michigan.

Dennison, who in her days as a Thomson High Lady Bulldog was known by her maiden name of Blasingame, will now be returning closer to home after accepting an assistant softball coaching job at Georgia Southern University. She is the daughter of the late Ben Blasingame and Janie Kate Blasingame.

“I’m incredibly excited about the energy that surrounds Georgia Southern softball at the moment,” she said.

Dennison said the school’s new athletic director is 100 percent supportive of softball and has brought a new energy to the athletic department as a whole. She added that the new head softball coach is very charismatic and will take the program to new heights.

“I’m really excited that she called me and asked me to be her pitching coach,” she said.

This is a return closer to home for the 2007 Thomson High School graduate because she has spent the past three years coaching at a college softball powerhouse — the University of Michigan. She had been looking for a chance to step up from NCAA Division II to Division I while assistant coaching at Georgia College several years ago.

“After my two years at Georgia College I just thought I need to go ahead and make this next step into Division I. I thought I was ready and I just applied at a ton of different places,” she said. “Usually people know who they are going to hire, but Michigan did not and Coach (Carol) Hutchins thankfully gave me a call,” she said.

Hutchins is in her 37th season leading the University of Michigan program.

“She is probably the longest tenured softball coach active right now and she is the second winningest head coach in NCAA softball,” Dennison said.

When Dennison first interviewed with the University of Michigan, she was on the return trip home and thinking of her dad. He had passed away in the fall of 2017. The father and daughter had always been close, watched a lot of sports together, and traveled together to see games in various locations.

“I was just thinking I would love the opportunity to tell my dad about my interview, just how I got to meet Coach Hutch and be somewhere like the University of Michigan,” she said.

As she was missing her dad, Dennison heard music coming from a book bag between her seat and an adjacent passenger’s seat. It was Cole Swindell’s “I Wish You Could Be Here.”

“It was just that song. It started right at the beginning of it and played all the way to the end. I did not hear a single other song that played,” she said.

Dennison accepted the position as a University of Michigan volunteer coach. In that role, she was paid to run softball camps and pitching clinics. The NCAA limits the number of paid assistant coaches on the roster, so working technically as a volunteer coach is not uncommon. At Michigan she helped coach catchers, hitters, defense, and in a variety of areas.

“Our coaching staff shares a lot of duties, which is a really nice thing and is a great opportunity to gain more knowledge at each position,” she said.

She ran individual camps such as a winter prospect camp for girls in the seventh through 12th grades, the same age range as in summer camps. But she also provided pitching clinics. The former THS softball player had the chance to marvel at what softball is like in Division I.

“I tell you, it’s been the greatest experience,” she said as she explained how at Michigan the average attendance is 2,000 and there is an alumni pep band that plays during the game. “To be on the same field as the University of Arizona or the University of Florida, and some of these other great institutions that you watch on tv is honestly indescribable,” she said.

“She was three weeks old at her first ball game,” Dennison said. “The Ohio State series was the first week she was with us.”

Countdown to Camp No. 5: How big is the UCF opener for the Broncos?

The smallest Dennison was even dressed in blue and maize for the games. She likely will follow in the footsteps of her mother, who started sports in Thomson at an early age.

“I started playing baseball when I was 7, I believe. I know I played baseball first and I didn’t start playing fast pitch softball until the eighth grade,” the veteran assistant coach said. Dennison, who of course in those days was know as Mary Beth Blasingame, played middle school softball as an eighth grader and started playing travel ball the summer going into the ninth grade.

She played for Augusta Flash and Georgia Rockers and continued playing travel ball all the way through her graduation from high school At THS, she started all four years as a pitcher, but also played a little outfield her freshman year. Many years later and now an experience pitching coach, how would she describe herself when she was a high school pitcher?

“I was probably more spin and location than I was speed,” she said. “I was probably throwing 60, but I didn’t throw much harder than that. That’s on the slower end when you are in high school.”

She points out how she played high school softball at a time when the pitching rubber was only 40 feet from the plate. Now it is 43 feet.

“I didn’t make that jump until I got to college. Now girls in high school play at 43 feet,” she said. She was a two-sport athlete all four years in her Thomson playing days. “Soccer was probably my fun sport, so I followed the one I took more seriously and was better at,” she said, of softball.

After being the THS female voted most athletic in her senior yearbook, Dennison headed away to play college softball at Middle Georgia College.

“I herniated a disc in my back and had to end up stop playing,” she said. Dennison played pitcher and outfield in college for a season and a half. “Then I did end up not playing the second half of my sophomore year because of my back injury.”

At Middle Georgia College she would have majored in early childhood education, she recalls.

“I just did education because they didn’t have sports management there,” she said. “And they tried to put me in the sports medicine track. I had no intentions of being a doctor, so I didn’t need to take Biology 1108 and Biology 1109.”

After the back injury shortened her time as a player, she transferred to Georgia Southern. There she earned a bachelor’s degree in sports management and her masters in higher education administration. More importantly, in Statesboro she began coaching.

“My junior year at Georgia Southern I was kind of missing softball and I wanted to find a way to get back into it, so I decided to coach rec softball at Bulloch County.”

She then also started teaching pitching lessons in Statesboro. In her senior year Dennison helped out with a high school team, Emanuel County. Then the next she transitioned the working with David Emanuel Academy. Finally she got a job coaching and teaching at Pinewood Christian Academy. In her first year at Pinewood, which competes in GISA AAA, the team finished in the Elite 8.

In her second year there, Pinewood won the state championship. But, she was also juggling coaching duties. In January of her first year at Pinewood she was working a camp in Dublin when she learned there was an assistant coaching position open at East Georgia State College. She took it.

“Both of my two years at Pinewood I was also coaching at East Georgia. I don’t know how I did those at the same time and got my masters and planned a wedding, all at the same time,” Dennison said.

After working as an assistant for two years at East Georgia she was offered a full time position as head coach. She accepted. However, that program was a junior college and she had her sights set on moving up.

“I knew who the old assistant was at Georgia College and she had just said ‘hey why don’t you put your name in, I’m leaving to take a head coach position at Young Harris’,” Dennison explained. “I applied, got a call back, and thought that was the right opportunity to go ahead and transition from juco ball into NCAA,” she said.

In those two years at Georgia College she coached outfield, pitchers, and catchers. More importantly, it was added coaching experience that set her up to make the step up to the University of Michigan.