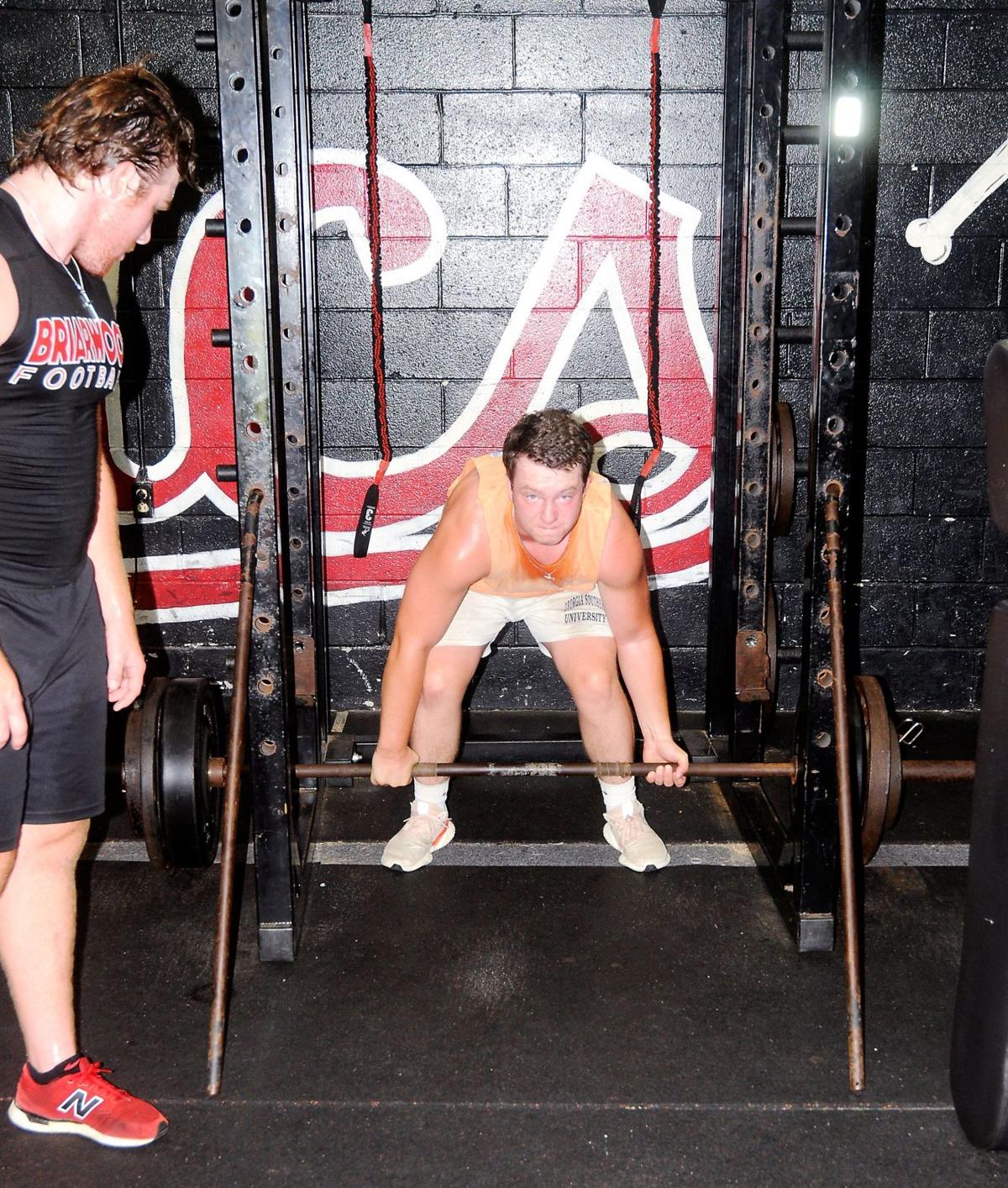 Scott Reynolds watches Landon Kent lift as they and the other Bucs hit the weight room. 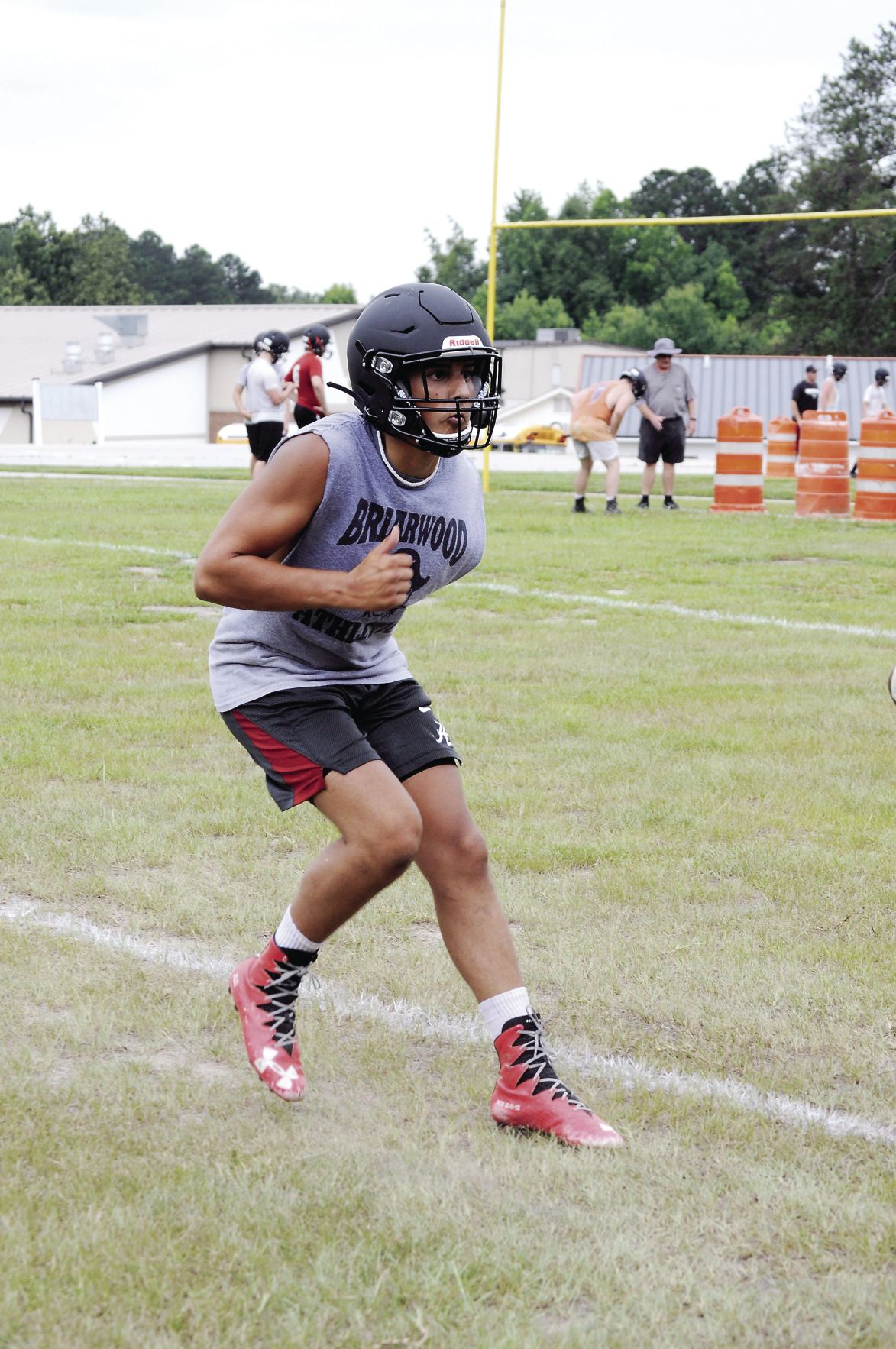 Gunner Stewart backs up while working on coverage drills with defensive backs.

Scott Reynolds watches Landon Kent lift as they and the other Bucs hit the weight room.

Gunner Stewart backs up while working on coverage drills with defensive backs.

Briarwood Academy’s Buccaneers have been working out, within allowances, to get ready for the fall season when Head Coach Bo Fleming expects to dress out 31 players.

The Bucs are taking this week off, but in recent weeks their practices have started to feel more normal, according to the coach.

Briarwood started practice, with limitations, the week of May 26. They practiced in groups of  10.

“We went for an hour and a half with each group,” said Fleming. “Then, the next week we bumped it to two groups of 20.”

After two weeks of split-sessions practices with less than 20 players in a group, the squad finally was able to start full group practice June 15.

“So we went the last two weeks with a full on group,” Fleming said.

The Bucs have split time between the weight room and the practice field.

“In the weight room, we’re doing everything we can to spread them out,” Fleming said.

Out on the practice field, Fleming keeps the players split up into smaller groups most of the time.

“I feel like the last two weeks we’ve been about as regular as we can get,” Fleming said. “The only big difference this summer, is we haven’t done any seven-on-sevens.   That’s been a  big difference in our summer schedule.”

He said he hopes to at least host some seven-on-seven action at Briarwood near the end of July.

For GISA schools the first allowed padded practice is Aug. 3

“We’re gong to try to still have football camp at the end of July,” he said.

At this point, he said it appears the Bucs will play their regular 10-game schedule in the fall.

As head coach, he is confident in where his team is at this point in the summer.

“I think we’re at a good spot. Our kids, they took the quarantine time and they actually worked. A lot of them improved a lot,” he said. “We’re in a good direction for next year. I feel like our guys are working hard and staying safe.”

Fleming said the seniors have provided good leadership over the summer, including both the quarantine time and in practice.

“Our seniors have been really good leaders so far and we expect big from them,” he said. “It’s a really good senior class and we’re excited about it,” he said.

Some new coaches join the staff this season at Briarwood plus Fleming and Coach John Barnett both return.

“Coach Barnett’s going to take care of the defense. He did a great job with us last year,” said Fleming.

Briarwood has hired Mitchell Davis as a new assistant coach and Ben Skinner, who works at Warren County schools, will help out as a community coach.

“My first year as a head coach Ben was here with me, he coached defense,” said Fleming.