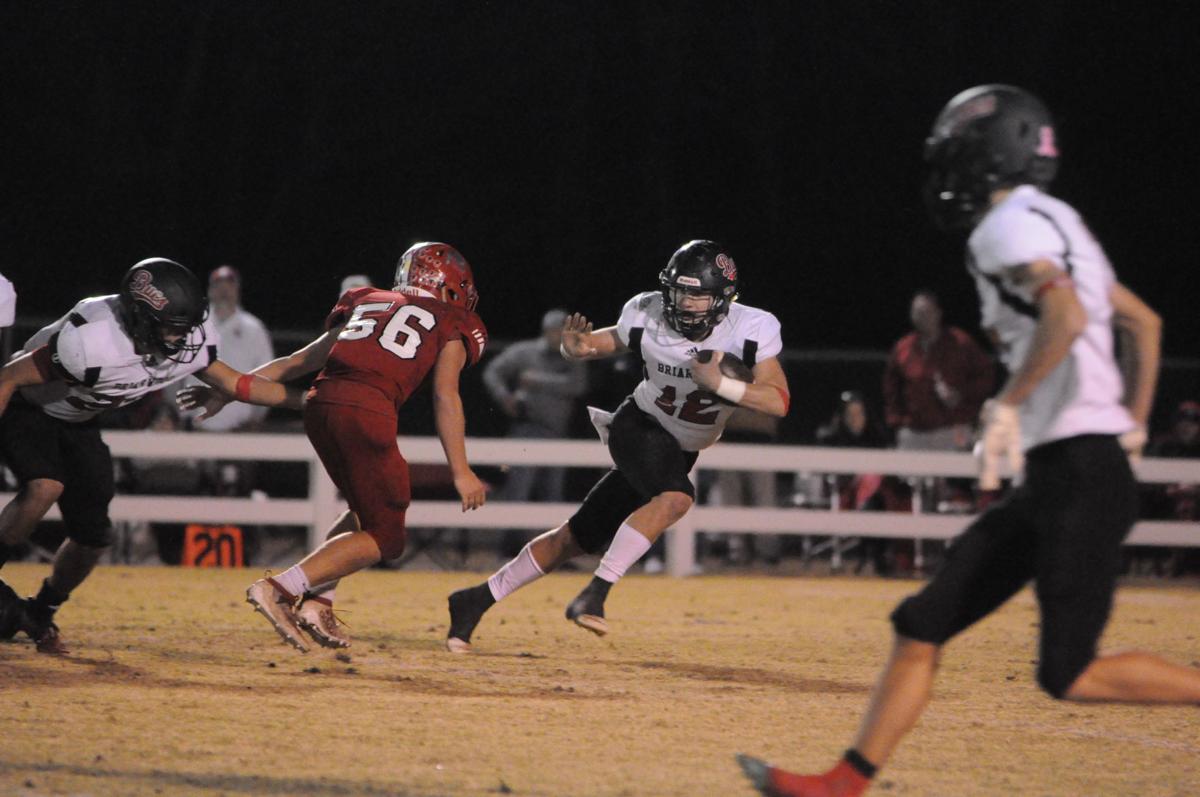 Briarwood quarterback Dax Reese evades a tackle in the 20-14 win at Edmund Burke Academy last Friday. Reese rushed for 204 yards against the Spartans. 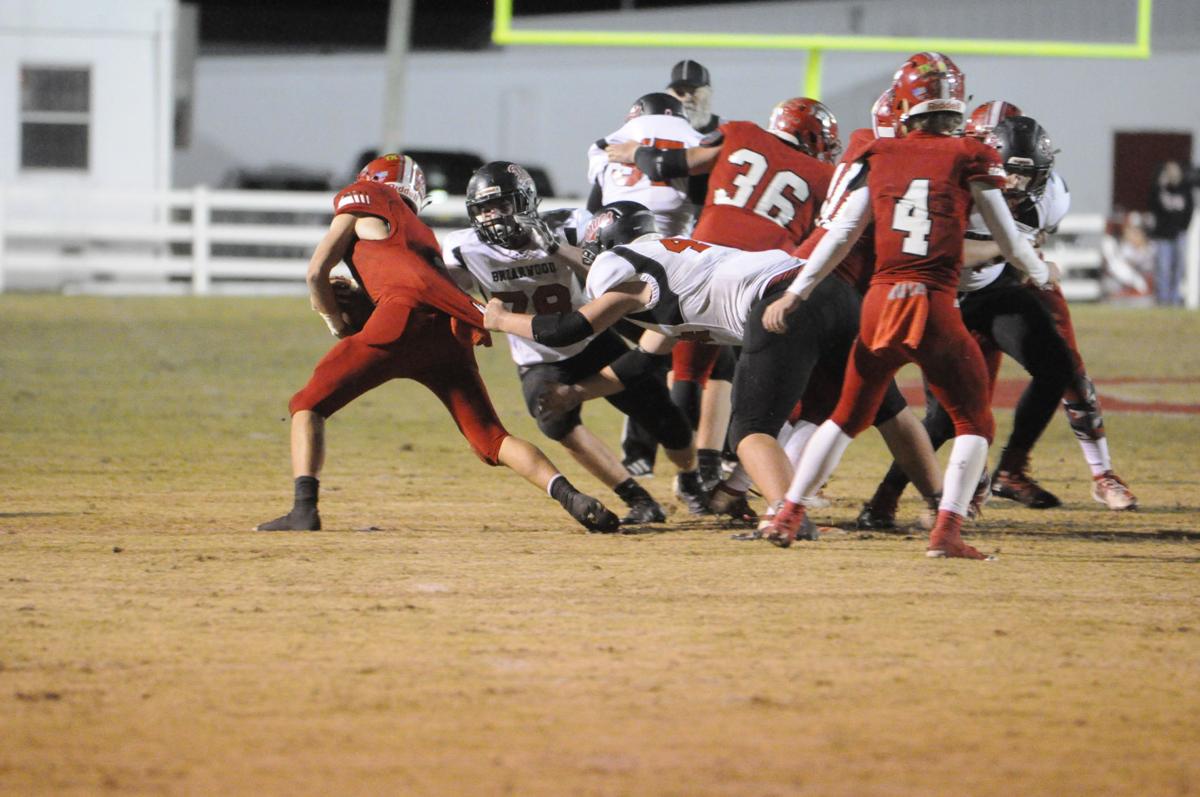 The Briarwood defense drags down the ball carrier. The Bucs only gave up 140 yards rushing. 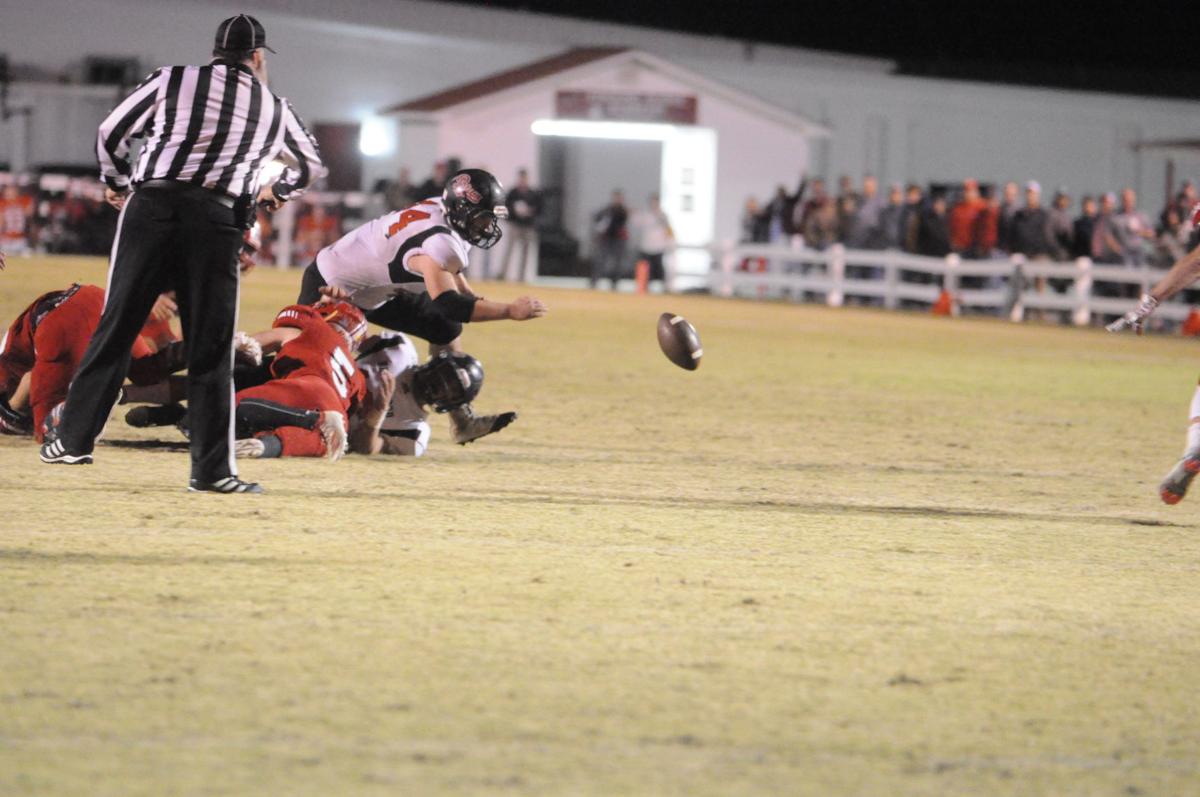 Briarwood’s Daxton Kent pounces on a ball fumbled by quarterback Dax Reese to prevent a turnover.

Briarwood quarterback Dax Reese evades a tackle in the 20-14 win at Edmund Burke Academy last Friday. Reese rushed for 204 yards against the Spartans.

The Briarwood defense drags down the ball carrier. The Bucs only gave up 140 yards rushing.

Briarwood’s Daxton Kent pounces on a ball fumbled by quarterback Dax Reese to prevent a turnover.

Edmund Burke Academy may have taken home the Backyard Battle rivalry trophy earlier this year, but Briarwood Academy is headed to the state title game this Friday. They will face the Gatewood Gators.

The Bucs defeated EBA 20-14 last Friday in Waynesboro to earn the right to advance to this Friday’s GISA Class AA championship game in Macon. Three weeks earlier, the Spartans had defeated the Bucs 24-21 in the annual rivalry game which closed out regular season play.

In the second, and more important of the two meetings,  Briarwood controlled the game.

“We were able to control the clock and time of possession, which was huge for us. We ran 60 plays to their 34,” said Briarwood Academy Head Coach Bo Fleming.

The Bucs opened with a scoring drive. They marched down the field to get into range, then Dax Reese rolled right and connected to Tucker Purvis for an 11-yard touchdown. With Trenton Cotton’s addition of the point after, the Bucs took the first lead, 7-0, with 8:18 remaining in the first quarter.

EBA tried to respond once they got the ball, however the Bucs’ defense shut down their running game and forced the Spartans to punt.

“Our kids really played as hard as they could and I couldn’t ask for a better effort around,” said Fleming. “Our defense played lights out. Our defense only gave up 140 yards on the ground and six yards through the air.”

The dueling defenses continued to hold and force the offenses to punt. But, a Briarwood fumble and a recovery which was nearly returned for a touchdown put the Spartans’ offense in striking range. Starting from the Briarwood 11 yard line, EBA only took four plays to score. With the conversion, the game was tied 7-7 in the opening minute of the second quarter.

“If we’re going to get our shot Friday we can’t put the ball on the ground. That’s about the only complaint I have about our offense from last Friday,” said Fleming.

Briarwood needed to put points on the board before the half. They did.

After EBA downed a punt deep in Briarwood territory, the Bucs started from their 12 yard line. Nine plays later Reese passed to running back Lucas Freitas who turned upfield and battled past one defender to reach the end zone on a 20-yard completion. Again Cotton’s kick sailed true.

With 17.9 seconds remaining until halftime, the Bucs were again in the lead, 14-7.

“A turning point for us was scoring right before the end of the half. That was a really big play for us,” said Fleming. “We had schemed that up. We had seen some things on film and we tried to run it earlier in the game.”

EBA received the kick to open the second half and the Spartans finally were able to move the ball. With a seven-play drive they reached the end zone. The point-after kick tied the game 14-14 near the middle of the third quarter.

Briarwood, following the kick return, drove 13 plays on the ground to score the go-ahead touchdown. Reese plunged through the middle from less than a yard out. The Bucs were up 20-14 with 2:44 to play in the third quarter.

The Spartans blocked the extra point.

However, Briarwood kicker Cotton responded by punching the kick off deep into EBA territory. The kick coverage team made the stop and a block in the back call backed EBA up even more. They started from their 12 yard line.

“Trenton Cotton has really come a long way kicking from the beginning of the year,” said Fleming. “He has turned into a weapon for us. He’s kicking the ball inside the 20 and sometimes inside the 10, which is huge for us. “

Briarwood’s defense yielded one first down, but then held and forced a punt. The Bucs consumed the clock and nearly scored a fourth touchdown after a long drive. A fourth-down shot at a touchdown sailed over the receiver and out the back of the end zone.

The rest of the fourth quarter remained scoreless, and the Bucs claimed the win.

Reese rolled to 204 rushing yards, from 30 carries, and passed for 93. Freitas tallied 23 yards from a total of seven carries.

Free Agency 2020: With tight cap, can Bears go on the offensive to fix woeful offense?

Friday at 5 p.m., the Bucs face the 11-2 Gatewood Gators for the state AA title. The game will be at the Mercer University stadium in Macon.

“They’ve got a very good offense,  one of the best we’ve seen all year,” said Fleming.

He explained the Bucs will need to stop the Gatewood rushing attack, including their option.

“We need to win first down on Friday on both sides of the ball,” added the Briarwood coach.

He already knows there will be a challenge in the middle of the Gatewood defensive line. The center of their defensive line in achored by a 6-foot-5 inch player who weighs 334 pounds and is committed to go to Colorado State.

“We’ve got to neutralize him when we’ve got the ball,” Fleming said.

For several Bucs, this is a second appearance in a state championship game. Freshmen from the 2016 team are now seniors.

“If we can throw everything at them Friday we will,” said Fleming.