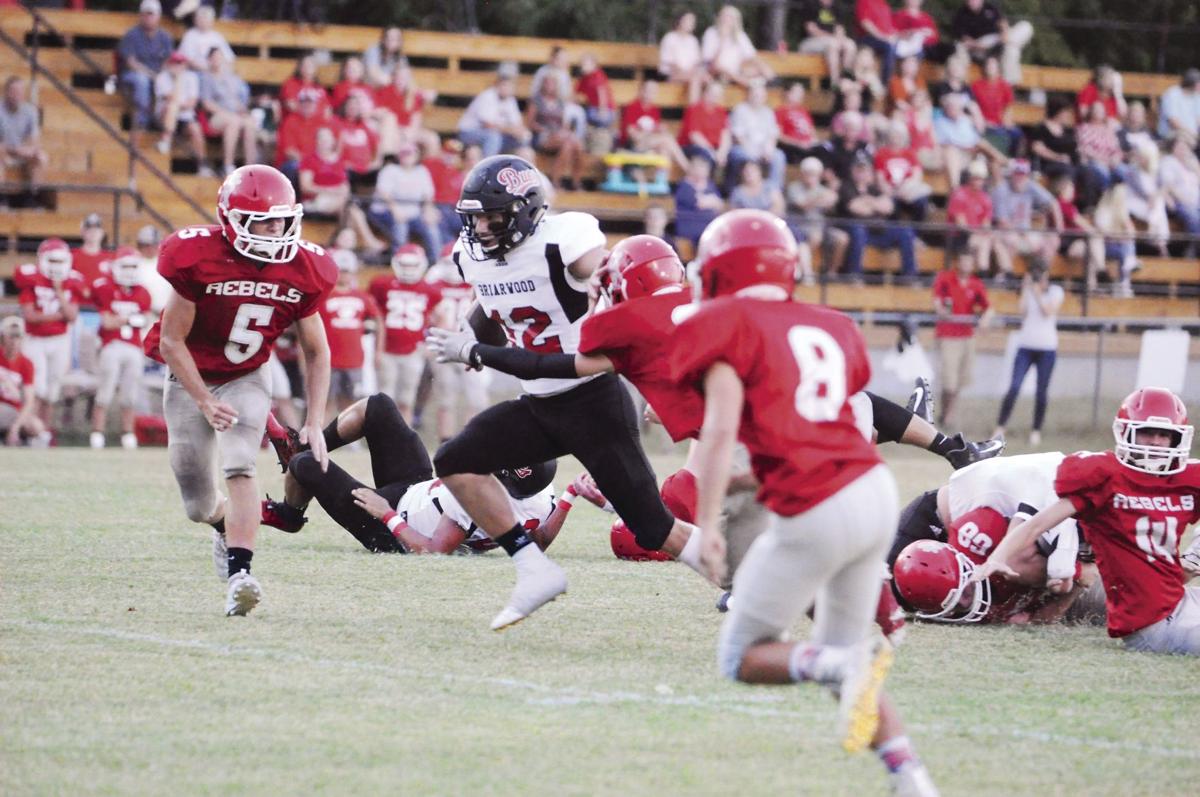 Briarwood Academy quarterback Dax Reese powers his way through the middle of the John Hancock Academy defense in the Bucs’ 46-15 win in Sparta. 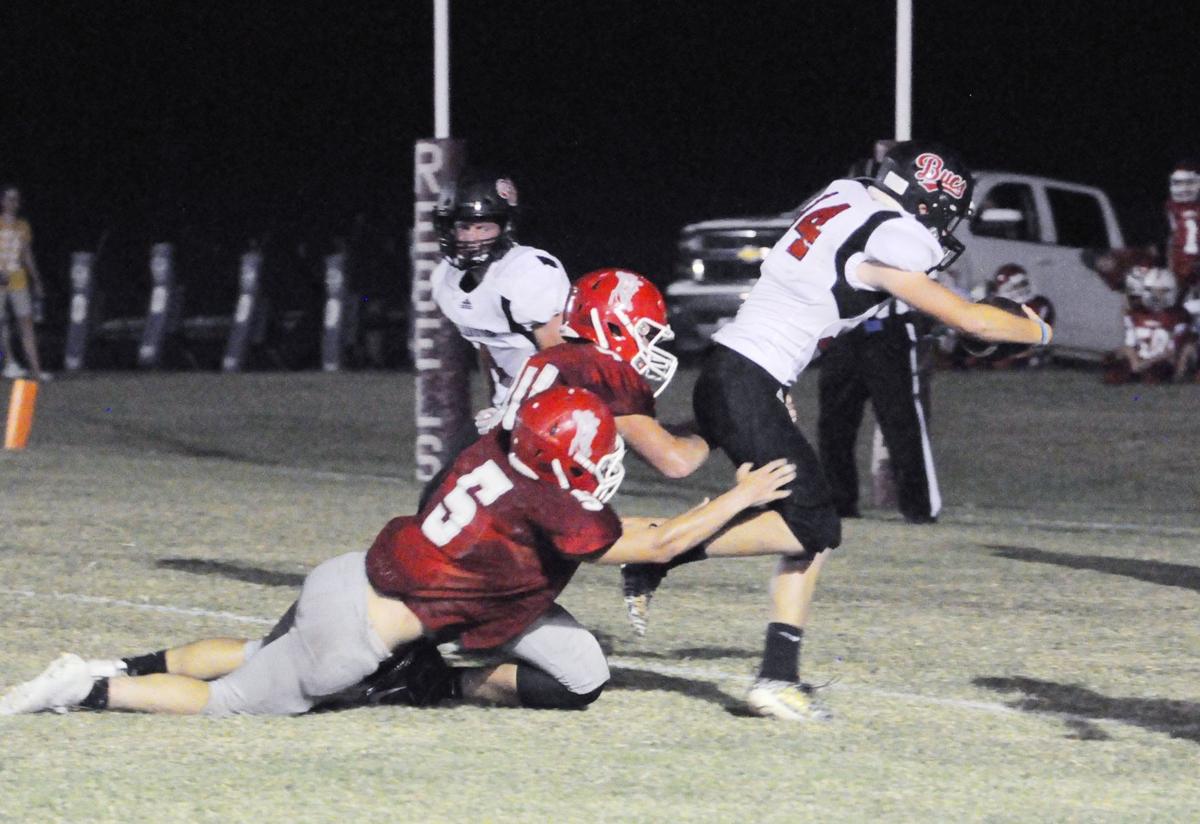 Hunter Williams shakes defenders on his way to the end zone for a Briarwood touchdown.

Briarwood Academy quarterback Dax Reese powers his way through the middle of the John Hancock Academy defense in the Bucs’ 46-15 win in Sparta.

Hunter Williams shakes defenders on his way to the end zone for a Briarwood touchdown.

John Hancock Academy’s Rebels were no match at all for Briarwood Academy last Friday as the Buccaneers handily claimed a 46-15 win in Sparta.

Briarwood was off to the races early, as part of a 26-point first quarter.

“Pretty much offensively with the first group we were able to run whatever we wanted to and have success,” said Bo Fleming, Briarwood Academy head football coach.

The Bucs strung together a five-play scoring drive which ended with a Lucas Freitas touchdown run from 15 yards out. Next, the Bucs’ defense held tough and forced the Rebels to punt.

Senior Chapman Mohr fielded the punt and raced 75 yards to the end zone. Not even halfway into the first quarter, the Bucs led 13-0.

Fleming said he cannot remember a Briarwood punt return for a touchdown. He said there may have been a kick off returned some years ago, but he thinks it was called back on a penalty.

John Hancock fumbled right back to Briarwood and the Bucs answered with a four-play scoring drive. Dax Reese carried around the left side on a quarterback keeper for the touchdown. Although the two-point passing attempt failed, the Bucs now were solidly in the lead, 19-0, with 5:56 remaining in the first quarter.

Troubles continued to plague the Rebels as their return man fumbled the kick off and Briarwood’s Thomas Wilkerson recovered.

Three plays later, Reese again found the end zone — this time from more than 30 yards out.

The Bucs’ next scoring drive began late in the first quarter and crossed into the second. A middle screen from Reese to Freitas was good for a 23-yard score. With the point-after kick good, the Bucs now held a 32-0 lead less than a minute into the second quarter.

Late in the quarter the Bucs launched an eight-play scoring drive. This time Hunter Williams, a freshman, carried for the score. The Bucs took a 39-0 lead into the break.

A young second-team Briarwood defense gave up two touchdowns, 15 points as a result, in the third quarter.

“Our younger kids —  we’ve just got to keep working with them and hope by the end of the year they will be able to help us,” said Fleming.

Briarwood added a final touchdown in the fourth quarter.

Recruiting Ticker, Jan. 21: Another busy junior day ahead for Huskers

Briarwood’s first team offense dominated and set the pace of the game.

“Lucas (Freitas) had another big night. Dax (Reese) had a good night,” said Fleming. “It’s a one-two punch. We’re going to try to ride that one-two punch this Friday night.”

Freitas had 14 carries for 172 yards and a touchdown. Reese had six carries for 88 yards and two touchdowns and Evan Moore rushed six times for 25 yards. Tucker Purvis, Jacob Petrie, Moore, and Freitas each had one reception. Reese completed three of six attempts for 39 passing yards and one touchdown.

“Defensively, the first group did really well. Honestly they had a great game defensively,” said Fleming. “We gave up less than 30 yards rushing with the first defense.”

Moore led the defense with five solo tackles and six assists.  Braxton Blakely had eight total tackles, including one solo. Daxton Kent and Thomas Wilkerson each recovered a fumble on defense.

This Friday the Bucs play host to Monsignor Donovan Catholic High School, of Athens, for homecoming.

“Mon Don’s very athletic. I feel like we are better up front on both sides of the ball,” said Fleming. “Speed wise, I feel like we can run with their guys so I expect to get a homecoming victory Friday.”