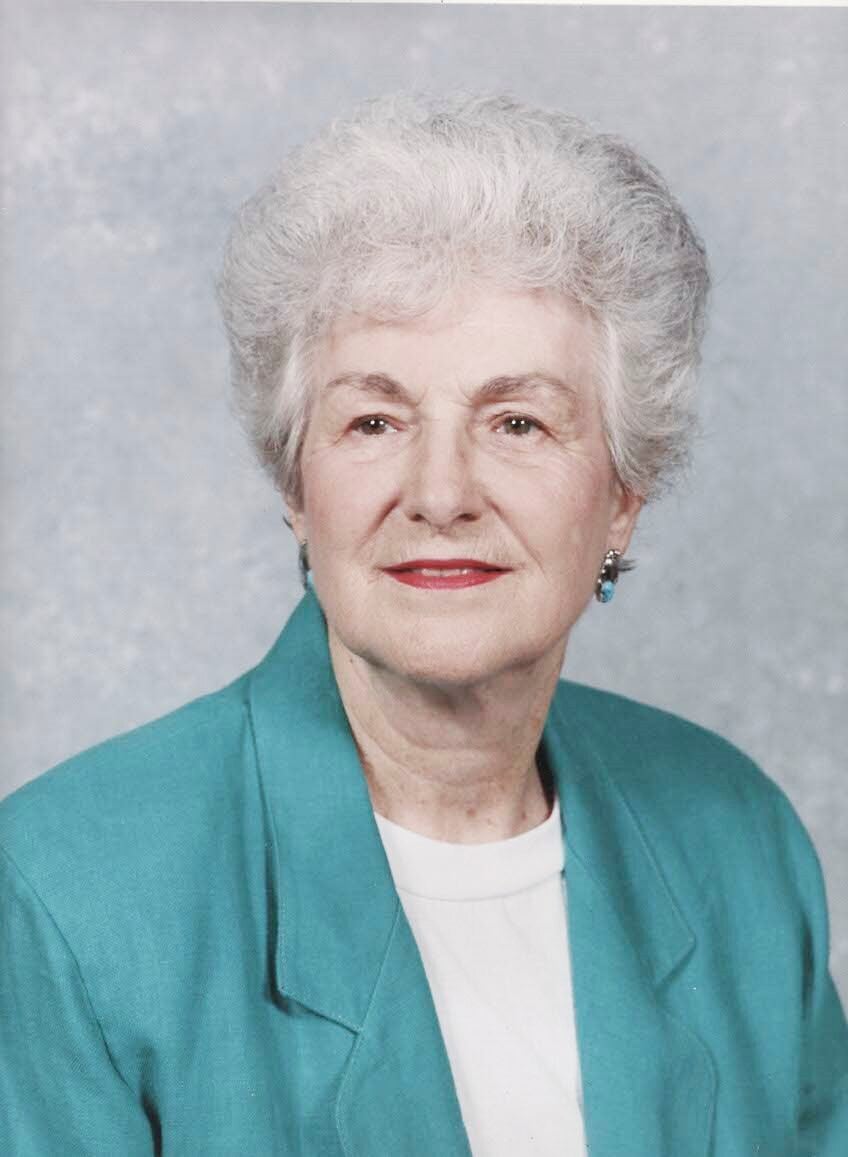 Harlem, GA—Celebration of Life Graveside Services for Mrs. Doris Watts Belcher, age 86 of Harlem, Ga, who entered into rest on Tuesday January 12, 2021, were held January 16, 2021 at the City of Jackson Cemetery in Jackson, Ga. Lewis Sims & Son Funeral Home, Jackson, GA is in charge of arrangements.

Albany, GA - The memorial service for the late "Lallie" Benkoski of Albany, who departed this life on 16 January 2021 at Pruitt Healthcare, Sylvester, Georgia, was held on 20 January 2021 at 2:00 P.M., with visitation beginning at 1:00 P.M. at Covenant Presbyterian Church, Albany, Rev. "Biff" Coker officiating. "Lallie" was born 24 January 1926 in Thomson, Georgia to the late Obedience "Obie" Rogers Dozier and Alice Louise Brinkley Dozier. Alice Elizabeth Dozier is her given name but has been called "Lallie" all her life by Friends and Family. She was preceded in death by husbands, Frank L. Jones, Jr. and Stanley J. Benkoski and daughter, Elizabeth Ledell Jones Murphy. Lallie graduated from Girls High School, Atlanta, GA. in 1944 and attended Georgia Evening College, Atlanta, GA. (now Georgia State University) for two years. She received her BBA in Business Administration from Albany State University in 1983. She then studied at the University of Salamanca, oldest University in Spain, with the International Intercultural Studies Program. Dr. Elena Odio and her husband Arnold were the leaders of this program and led the group on a two week tour of Southern Spain to learn the culture of Spain. In 1951 Lallie assisted her husband, Frank Jones, in building the Albany, Georgia State Farm Insurance Agency. Lallie was member of: Shiloh United Methodist Church, Winfield Community, Columbia County, GA; Ormewood Presbyterian Church, Atlanta; Kirkwood Presbyterian Church, Atlanta; First Presbyterian Church, Albany; and in September of 1955 moved with 174 other members from First Presbyterian as charter members of Covenant Presbyterian Church, Albany. In 1968 she became a member of Commodore Richard Dale Chapter, DAR. In 2018 she was awarded her 50-year membership pin and certificate. In 1955 Lallie became a member of the Albany Junior Woman's Club. She rose to the office of president of the Albany Junior Woman's Club 1966 Then in 1967 she became a member of the Albany Woman's Club. Lallie is a Charter member of Friendship Force International, Albany, GA Club. She was involved in exchanges from Russia and New Zealand. Lallie was involved in exchanges with Germany, Japan, and Brazil where she lived in private homes and enjoyed meeting the people and learning more about their culture. Lallie has enjoyed The Travel Club where she traveled to Alaska and many other places with this group of special friends. Lallie volunteered at Brasstown Bald Visitors Center near Blairsville, GA. In summers of 1984 and 1988. She also volunteered at YMCA Camp of the Rockies. Lallie visited England seven times. One time she attended the International Brinkley Family Reunion. She has traveled extensively in every state of the union and many countries. Genealogy has been her hobby since 1967. She has formed seven family associations and attended reunions often. She has made many presentations at the various family reunions she attended over the years. She would especially enjoy presenting the program, "Family Heirlooms". Among those who will miss her and her family stories are: Son, Stan Jones and wife Margie of Lake Blackshear, grandson Mason Dozier Jones of Atlanta, GA., grandson Christopher (Ian) and Victor Murphy of Cary NC, great grandchildren Margaret "Maggie" Murphy and Porter Murphy of Cary NC , nephew Robert Anderson "Ande" Murphey of St. Petersburg, FL, as well as many nieces, nephews, cousins by the dozens and many friends. In lieu of flowers memorials may be made to Covenant Presbyterian Church 2126 W. Edgewater Drive Albany, Ga. 31707 or Shiloh United Methodist Church 5970 Cobbham Road Appling, Ga. 30802.

Mr. William Lloyd Hawkins was born in Glascock County, Georgia on April 13, 1938 and went to his final resting place on January 14, 2021. He was the son of the late German Jack Hawkins and Emma Smith Hawkins. William was preceded in death by his parents and brothers, Hubert Hawkins, Charles Hawkins, and Bennie Hawkins. He is survived by his children, Cynthia H. May of Augusta GA, Cheryl H. Locke (Carey) of Alamo, GA, Craig W. Hawkins of Augusta GA, and one granddaughter; Aleah K. Hawkins of Lake Oconee GA and two sisters, Helen Marsh of Lawrenceville GA, and Betty Norris (Ronny) of Evans, GA. William was also survived by his his close friend and fishing buddy, Cliff Crowe of the Raysville Community, and longtime friend Johnny York of Wadley GA. William was an avid Fisherman and Huntsman. He taught his children to hunt and fish at a very early age. He spent many trips to the lake camping, fishing & hunting. William won many trophies at fishing tournaments from Thermo King / Westinghouse where he worked for 31 years prior to retirement. He was a Sheet Metal Inspector for Westinghouse which required his exceptional mathematical skills and knowledge. He graduated from Glascock County School in 1956 and always enjoyed his class reunions with his fellow classmates. William loved his family, neighbors at Raysville Community and his Raysville Marina extended family. He grew up and attended church at Mt. Zion Methodist Church, Edgehill GA, and in most recent years attended Raysville Baptist Church in the Raysville Community. Our family would like to thank Dr. Daryl Wiley, Megan Riley PA, Michael McDaniel PA, Dr. Joe Wills and Lake Crossing Health Center & Staff, Bonnie Weeks and staff University Hospital ICU Augusta, and all other caregiver's who assisted in our father's care over the past several years. Also, we would like to thank his great neighbors and friends on Wood Valley Rd and Virginia Rd who assisted in caring for our father, checking on him every day, doing yardwork, food, and all the little and big things that you did mean so much to us. The family received friends from 1 until 3 p.m., Sunday, January 17, 2021 at Beggs Funeral Home, Thomson GA. A private burial will be held at Savannah Valley Memorial Gardens. It is the family’s request that memorial contributions be made to the charity of your choice or to the Raysville Baptist Church, Thomson GA. Due to the current national health concern, the family would appreciate all phone calls, cards, texts, and e-mails. Beggs Funeral Home, 799 Cobbham Rd., Thomson, Georgia is honored to serve the family of William Lloyd Hawkins.

Thomson, GA – Mr. Austin Ivery, Jr., age 78, passed away January 15, 2021. The funeral arrangements are currently incomplete, and will be announced at a later date. Relatives and friends may call at the funeral home. Thomson Funeral System, Thomson, GA is in charge of arrangements.

Douglasville, GA - Celebration of Life Graveside Services for Mrs. Lucille Calhoun “ GanGan” Morris, age 84, will be held on Saturday, January 23, 2021 at 11:00 am at the Savannah Valley Memorial Gardens, Thomson with the Rev. Glennie Olive, presider and Bro. Wayne Calhoun (son) Words of Comfort. Public visitation will be held on Friday, January 22,2021 at the funeral home from 1-7 pm. Final glance will be held at the cemetery on the day of the service. The funeral cortege will leave the residence of Wayne Calhoun , 137 Viola St., Thomson at 10:30 am. On January 13, 2021 the Lord touched the beautiful soul of Lucille Morris and carried her home to a place of peace, and of no more pain and suffering. She was born on December 28, 1936 to the late Alberta Cummings and the late Wilbur Calhoun in Thomson, GA. Lucille resided in Douglasville, GA, living with her daughter, Priscilla Wallace and granddaughter, Latrice (DeAndre) Lovelace. Lucille is preceded in death by a son, Bennie Lee Calhoun. Left to forever cherish her memories: 5 children whom she loved dearly, Priscilla Wallace, Wayne Calhoun (Laverne Davis), Neva Calhoun, Bobby Morris and, Jimmy Morris; 2 brothers, Hurbert “Spatz” (Mary) Calhoun and Willie Calhoun; 12 grandchildren, many great-grandchildren and several great-great-grandchildren and a host of other relatives and friends. Thomson Funeral System, Thomson, GA is in charge of arrangements.