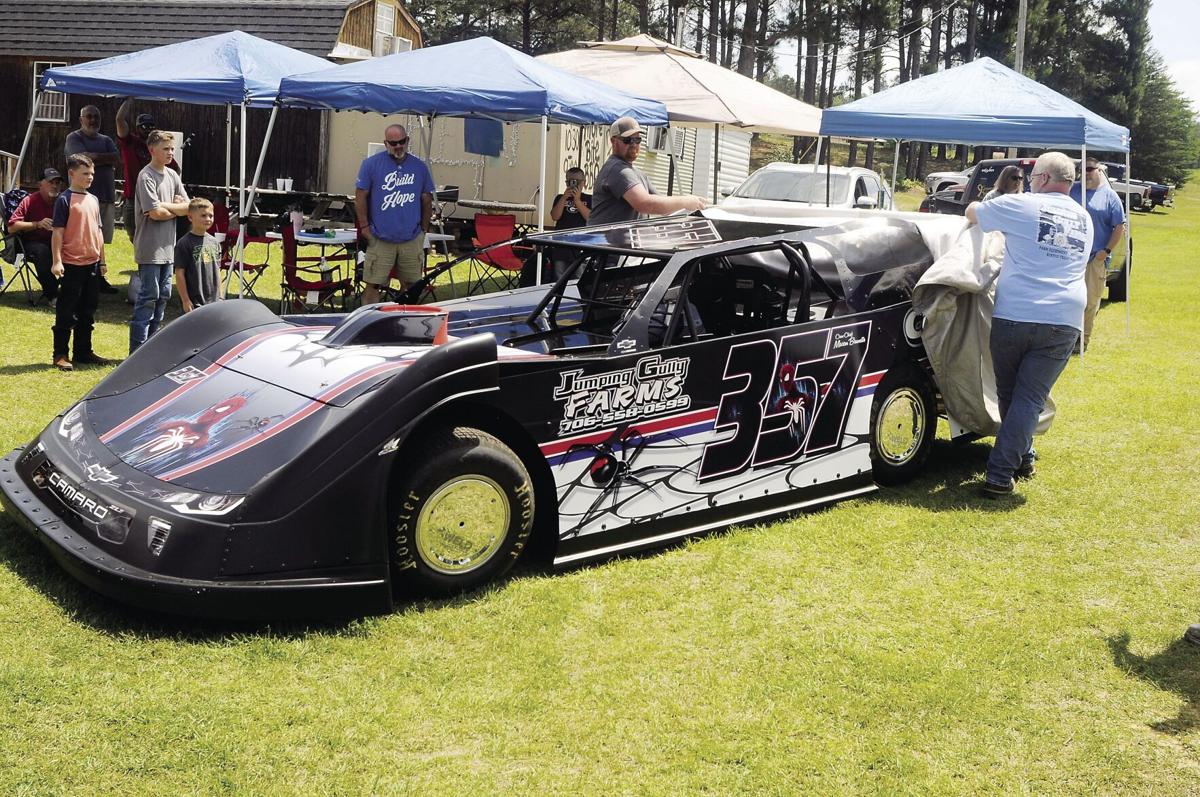 Kyle Connell, shown at right, unveils a new look for his race car and little Mason Burnette is the new crew chief. 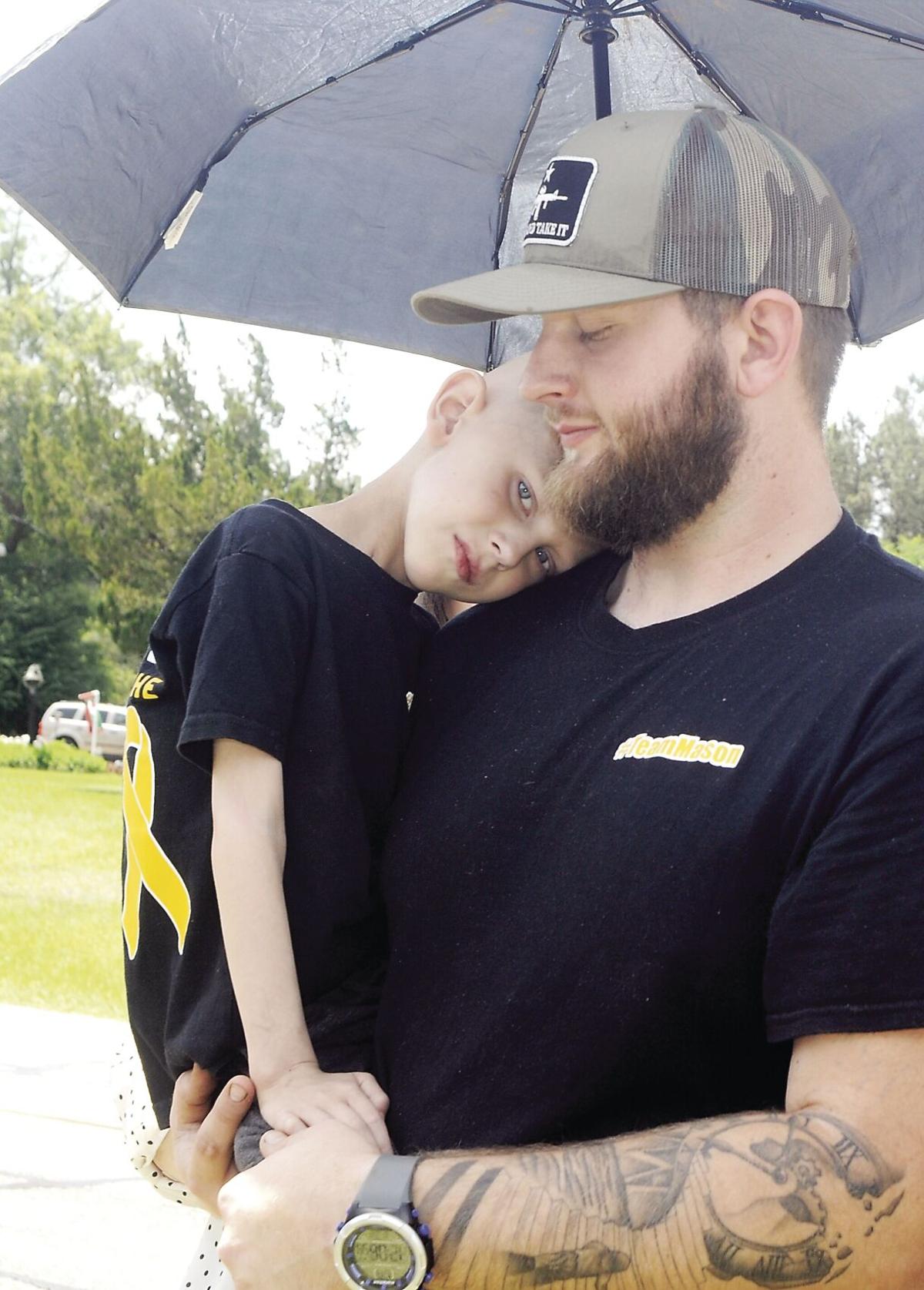 A tired Mason Burnette rests on the shoulder of his dad, Dustin Burnette, as the car is revealed.

Kyle Connell, shown at right, unveils a new look for his race car and little Mason Burnette is the new crew chief.

A tired Mason Burnette rests on the shoulder of his dad, Dustin Burnette, as the car is revealed.

As 5-year-old Mason Burnette continues his fight against cancer, the latest show of support for the little Gibson boy came from the racing community.

Saturday, at noon, a local race car driver unveiled a new look for his car. It featured Spiderman graphics, which aligns with Mason’s love of the super hero characters and his motto of Be A Hero. Mason was also listed on the side as the car’s crew chief.

Russell Lovett, of Thumbs Up for a Cure Racing, organized the reveal of the new wrap on the race car and dozens gathered at One More Bite BBQ.

“We work with kids with childhood cancer. What we try to do is put a smile on a kid’s face because they are facing so much as it is,” said Lovett.

He explained the child is made a crew chief and assigned to a driver close to home in hopes that the child and family can go see their driver race. The driver is Kyle Connell, of Gibson, and he sponsors Mason as his crew chief.

Connell owns the car and is responsible for the graphics and wrap.

“When the kid sees it, he will know it’s his car,” Lovett said. “It’s a way to help get the kids out. These kids spend a lot of time in the hospital and it’s a good breather for the family.”

Lovett said it helps the families see a smile on their child’s face.

“We’re a small community so we come out for each other and take care of each other,” said Connell. “When one has a problem, everybody’s together.”

Hartwell Speedway this upcoming weekend will be Connell’s first race with the Spiderman/Mason car. Connell grew up in a racing family.

“Racing’s close knit. It’s like a family,” Connell said. Lovett said he and a friend started the organization Thumbs Up for a Cure Racing about six years ago. He explained affiliated drivers can be a support driver, meaning they have organization logos on their cars; or team drivers, meaning they have a child as a crew chief. Connell started as a support driver and now has become a team driver.

'A private matter': Biden on US Catholic bishops' potential rebuke

See explosion triggered by US Navy cause earthquake

Sanders: 'Not easy' to satisfy every Democrat on infrastructure

“The kids and your fans are your real winners in this. Because you think about it, whether this car finishes first or last, as long as that kid sees his car out there racing that’s his hero. Either way, the kid is the one that’s winning,” said Lovett.

Every child gets a trophy from Thumbs Up for a Cure Racing. Lovett said drivers donate trophies and he has them redesigned to honor the children. Mason was accompanied by his parents, Makayla Hall and Dustin Burnette at Saturday’s unveiling.

“It’s crazy. He loves it. Even though he is tired and laying down he still has a smile on his face,” said Hall. “He loves it and we love it and I think it definitely expresses him. He loves Spiderman.”

She explained how the Be a Hero theme developed.

“He always liked the super heroes, that was his thing when he was first diagnosed,” she said. “When we first partnered with Shepeard Blood Center they did the Be a Hero thing and Superhero Mason kind of picked up.”

Those treatments have been at Children’s Hospital of Georgia, located in Augusta. After that, sometime this summer Mason will go to Children’s Healthcare of Atlanta for a stem cell transplant.

“He is still so wild at heart. Even when he is tired, as soon as he is able he is guns blazing,” Mason’s mom said. “Kids are resilient and he is doing his best. All we can do is support him.”

Mason’s teacher was even on hand Saturday to show support.

“Mason is very smart, very determined, and one of the most determined fighters I have ever seen,” said Samantha Usry, pre-k teacher in Glascock County.

Saturday’s event was the end result of Brandy Williford talking to Lovette, who came to One More Bite BBQ and asked if they would host the race car reveal.