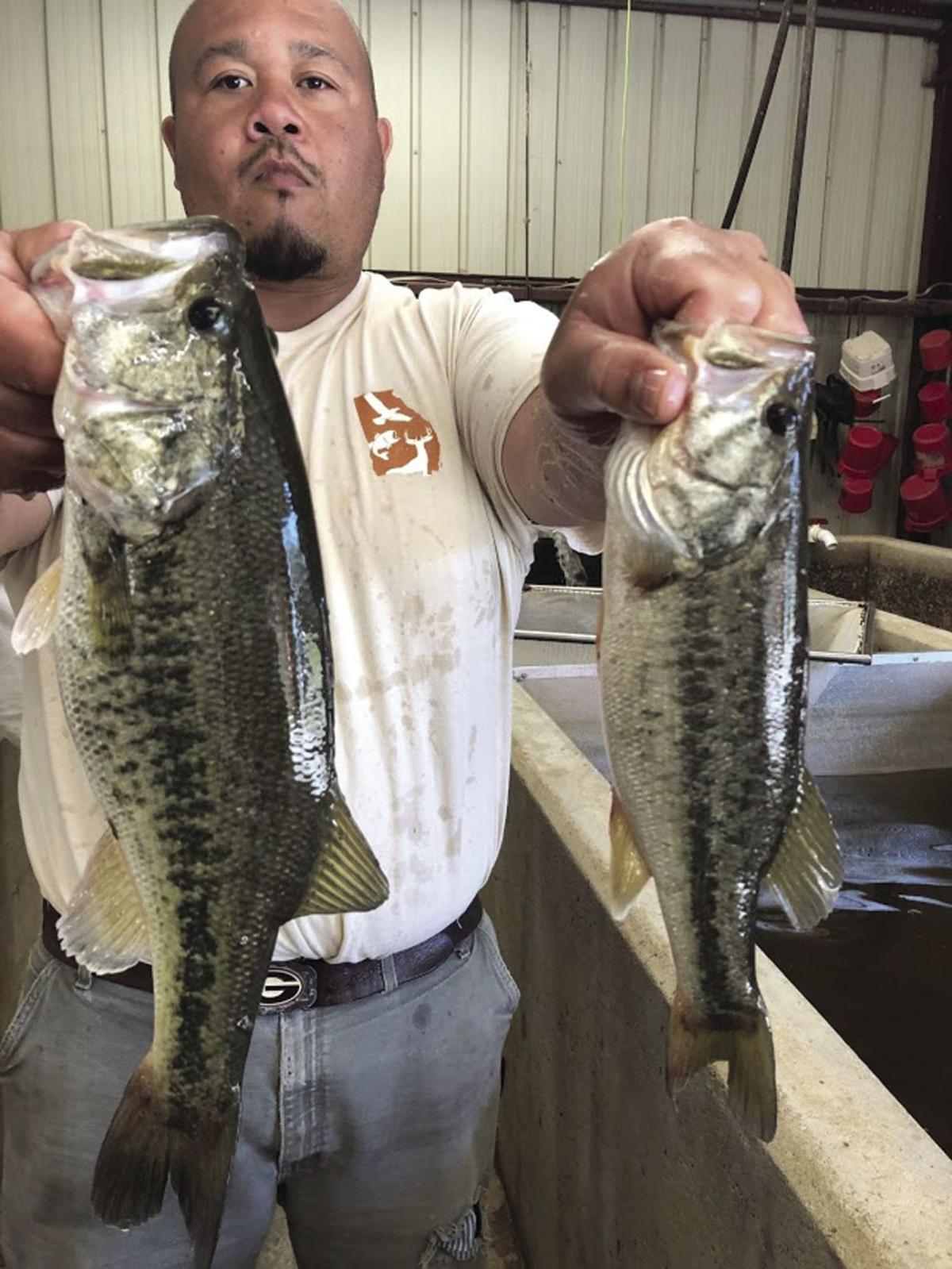 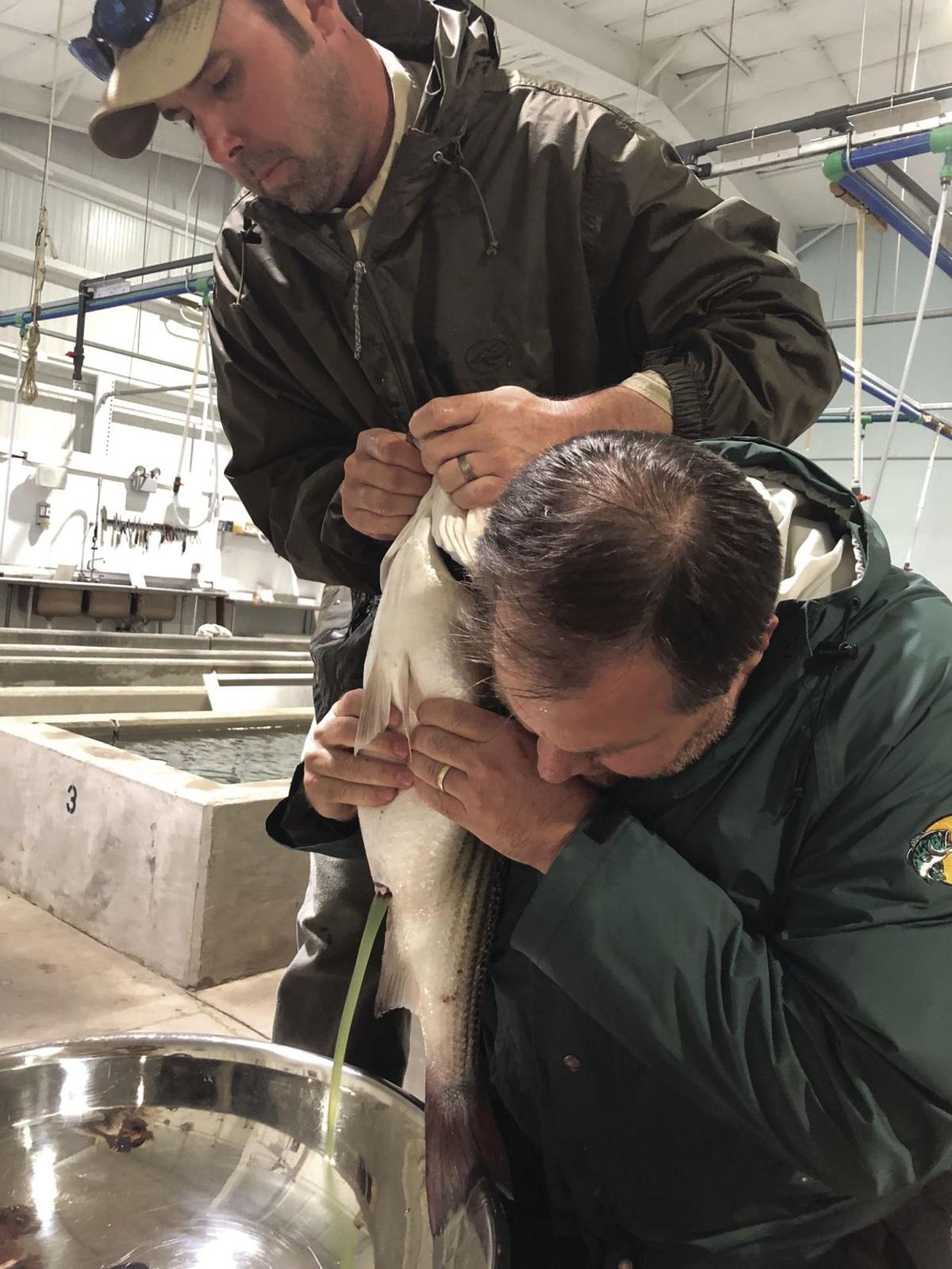 Hatchery workers gently squeeze a striped bass in a stripping process that will end with the staff hand stirring a bowl to milt eggs.

Hatchery workers gently squeeze a striped bass in a stripping process that will end with the staff hand stirring a bowl to milt eggs.

The McDuffie Public Fishing Area (PFA) hatchery raises approximately 2 million fish a year, primarily producing shell cracker/redear sunfish and channel catfish. Over the 365 days of the year it’s open, from sunrise to sunset, 30 to 40 thousand guests fish at the seven lakes of the facilities and the two ponds used for kid’s fishing. Most come at the beginning of spring and the early part of fall. These also happen to be high production times for the facilities.

A number of people keep the area running. The hatchery has a staff of four. Lewis Boykin works as the fisheries technician supervisor/ area manager for the McDuffie Hatchery.  Chalisa Fabillar works as the hatchery assistant manager. Vernon Baldwin works as the PFA’s area manager with Jay Payne as his assistant. With them, Dot and Steve Kay lead the McDuffie Environmental Education Center. And, the hatchery has four volunteers; Bob Shultz, Bonnie Shultz, Pete Poage, and Kathryn Poage. They work as the campground hosts, but volunteers at the hatchery can perform a number of jobs there, including such things as repairing items and harvesting fish.

For the past few years, Boykin said the hatchery has been the state’s primary producer for catfish, due to his predecessors work in fine-tuning the process for catfish rearing. The process in general for raising fish at the hatchery is something that takes care.

Boykin said that overall fish health is dependent on things like water quality and the amount of oxygen in the water. For example, too much vegetation can mean that the water will lack oxygen. Vascular plants, when they decompose, takes oxygen out of the water. That kills the fish.

The gills just help the fish process the oxygen out of water, he explained.

Other vegetation, Boykin said, can cause more issues. If a pond has too much  of a certain kind of algae, fish can get trapped in it. This will kill them too. Taking care of the hatchery ponds is a balance of making sure the environment is just right.

“We’re trying to mimic what’s in the wild, but make them survive more than they would in the wild,” Boykin said.

Some fish, like a few of the bream species, the hatchery leaves in a stock lake to naturally populate. Others, like the bass, the hatchery picks up from another facility, puts them on a spongy mat to lay eggs, and then take the eggs to hatch in the hatchery’s facilities.

When it comes to feeding the fish, the hatchery goes through 20 tons of feed a year. The feed they use is made mostly of protein, provided from a local manufacturer. To feed predatory fish, the hatchery raises fish like golden shiners, chubsuckers, and aquarium goldfish. The little fish eat plankton.

To hatch fish eggs, hatchery workers are hands-on at times. For like the walleye, the hatchery puts the fish in a stripping and milt process. They lightly squeeze the eggs out of the females into a bowl and then inseminate the eggs with the male fish. Then the workers stir the bowl, put the eggs in a jar to hatch, and finally send them to other hatcheries or stock their ponds.

Each fish has its own laying amounts. A striped bass lays between one to four million eggs at a time, depending on size. However, all those eggs don’t survive. Boykin said that about 60 percent of those eggs make it.

To gauge the success of the fish that lived, Boykin said the hatchery looks at size. A bass, for instance, is expected to grow to eight to 10 inches in a year, he said. At the beginning, they don’t appear anywhere near their final form.

“When we stock them, they’re just eyes and tails,” he said. “You wouldn’t know they’re fish.”

Once the fish grow to their full size, harvest begins. During this production season,  the hatchery workers start work at 7 a.m. and go until between 4 and  5p.m.  Some of the fish must be harvested at night due to their light sensitivity. Boykin said that exposure can stress the fish out. A stressed out fish is bad news in the hatchery.

Some places to reach 50 degrees below freezing

Surgical gown shortage delays surgeries across the US

Ten thousand fish laying on their side is something Boykin said puts hatchery managers in high alert. The fish look dead, but the flapping mouths indicate that they are actually in shock from stress. The stress, however, can eventually kill them.

“Stress is hard for any species,” Boykin said.

A number of factors can cause stress for fish. If too many occupy a pond, that’s one stresser.  In addition, the eventual harvesting causes its own stress for the fish. If workers harvest in the heat, the fish can get stressed. This is why, Boykin said, the hatchery doesn’t harvest in the summer.

To combat unavoidable stress, Boykin also said the hatchery has some techniques. They can add salt to the water. Boykin said handling the fish only as needed decreases the chances of stress.

Once harvested, the hatchery distributes the fish to public waters, to private ponds through a government sale program, and to areas for special events like Kids Fishing. The district’s Department of Natural Resource staff visits Thomson two times a year to survey the ponds for the health of the ponds and to gauge the density and number of fish in them. Bass and bream get supplemented as needed. Channel catfish are restocked annually since customers fish them out so frequently. Visitors of the hatchery have a daily limit of the fish that they can take: five catfish, five bass, and 15 bream per species.

Boykin noted that the hatchery is getting more and more attention as time goes by.

“Word of mouth has taken off about this place,” Boykin said. “[But,] we’re still the best kept secret.”

Boykin said he gets a kick out of seeing how visitors enjoy their fishing experience. He spoke about how important the work of hatcheries are, not just to supply fish for sports activities but upkeeping the environment.

“Without our efforts, populations would decline. To continue a fishery, you have to give back what’s taken out,” Boykin said. “In the wild, survival isn’t that high. What we do is give them a head start.”