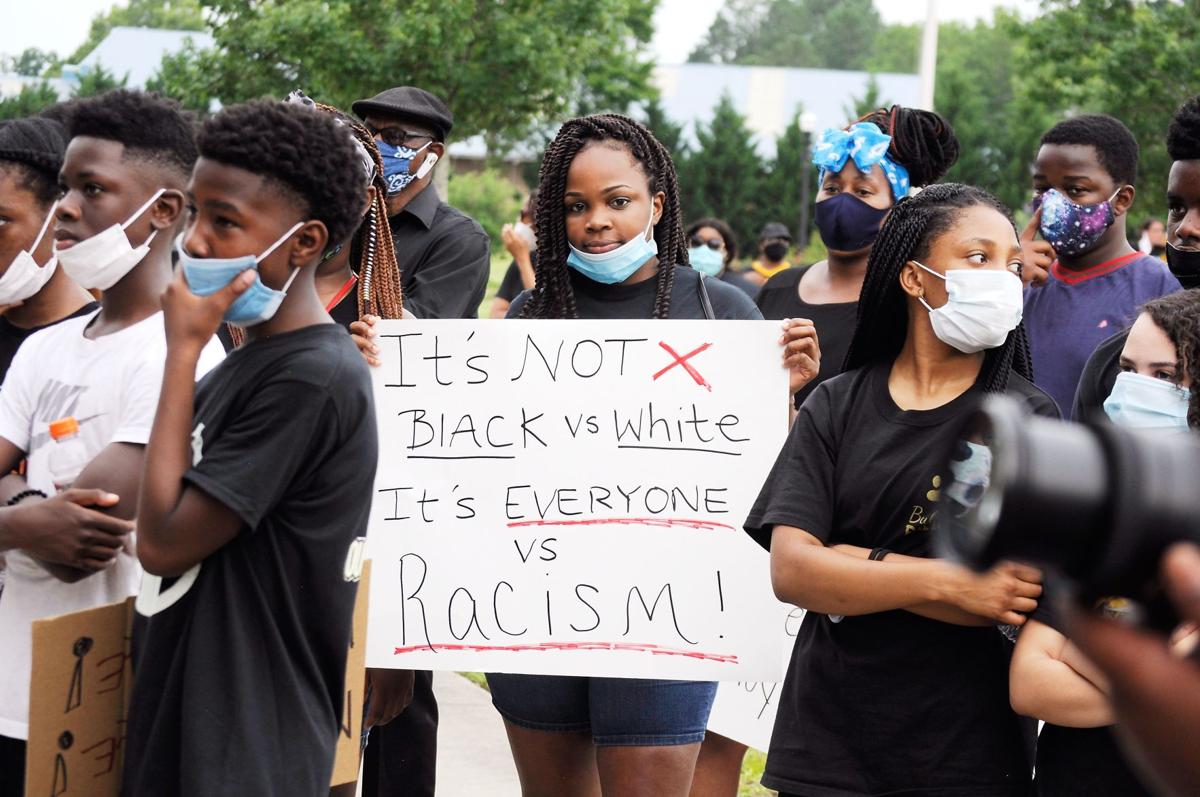 Casandra Jones is shown with her sign at the McDuffie County Courthouse during the Stand By Me March on Saturday.

Younger participants leading the Stand By Me March take a knee and pause at the intersection of Main Street and White Oak Road during Saturday’s trek from The Brickyard to the McDuffie County Courthouse. 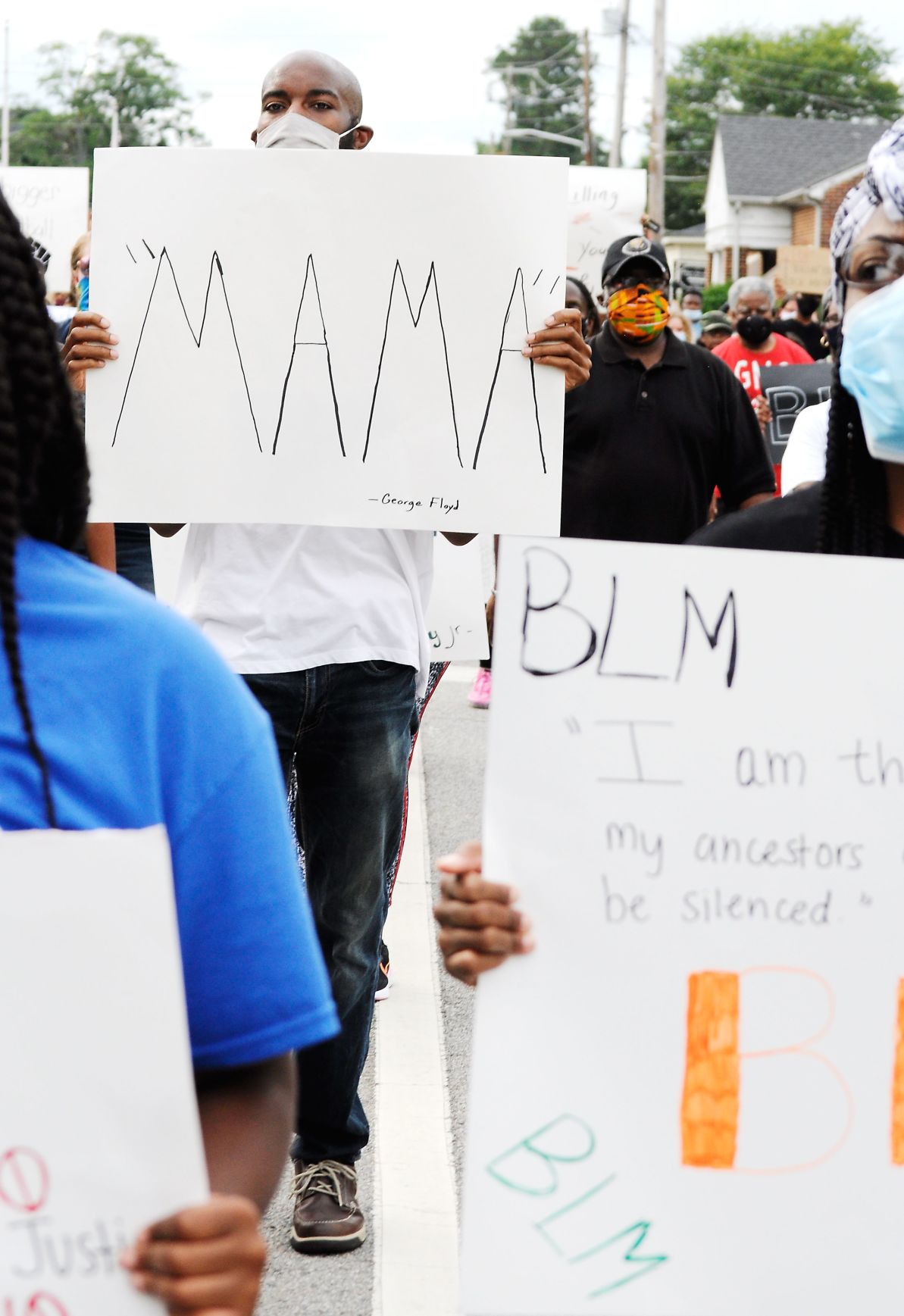 Chris Crenshaw displays his sign as he and the others march along Main Street from The Brickyard to the courthouse. 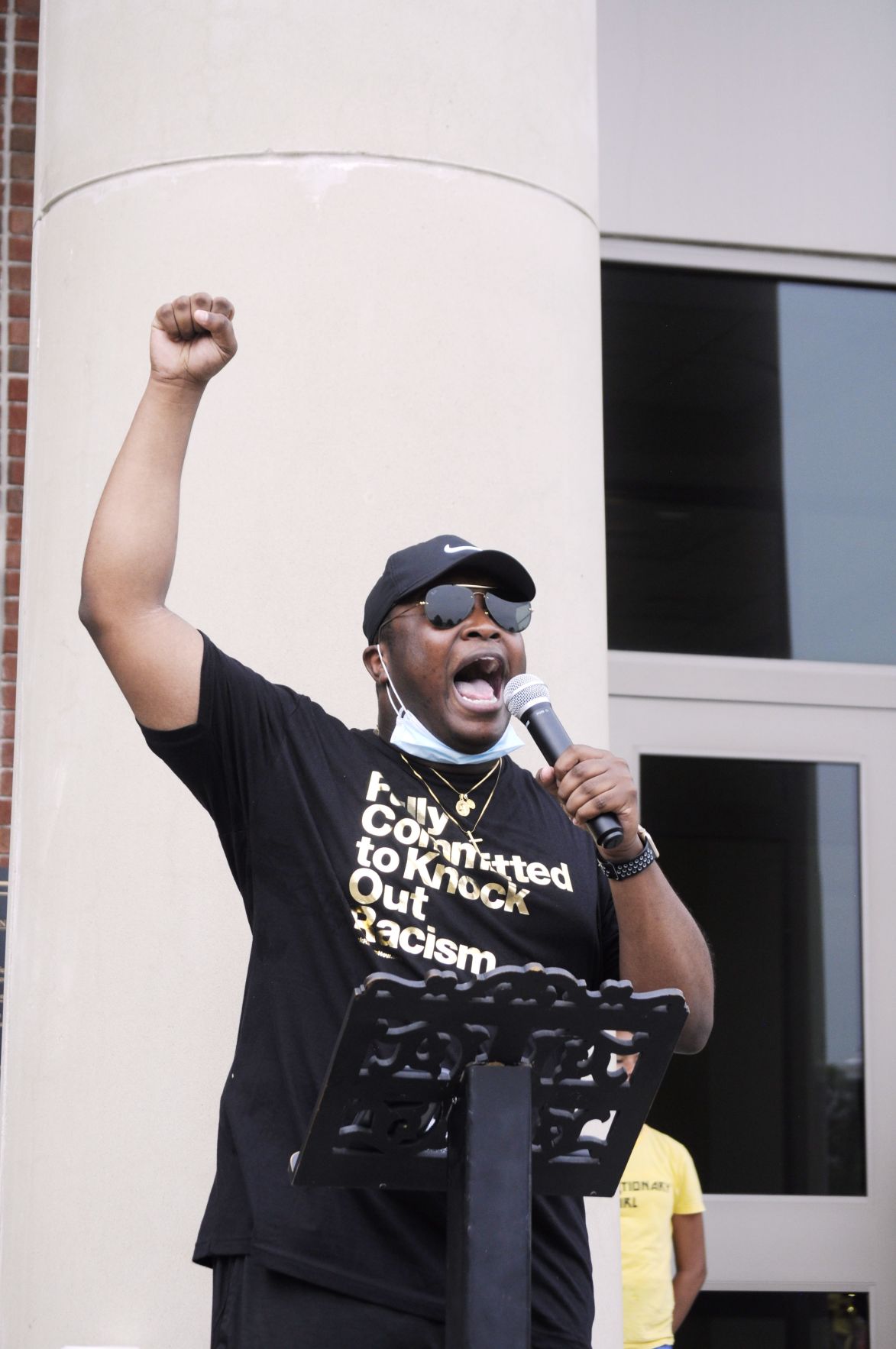 Cedric Norris Jr. addresses the crowd assembled at the courthouse.

Casandra Jones is shown with her sign at the McDuffie County Courthouse during the Stand By Me March on Saturday.

Younger participants leading the Stand By Me March take a knee and pause at the intersection of Main Street and White Oak Road during Saturday’s trek from The Brickyard to the McDuffie County Courthouse.

Chris Crenshaw displays his sign as he and the others march along Main Street from The Brickyard to the courthouse.

Cedric Norris Jr. addresses the crowd assembled at the courthouse.

Saturday afternoon, what appeared to be several hundred people joined together for the Stand By Me March, which began at The Brickyard and concluded at the McDuffie County Courthouse.

Once at the courthouse, several keynote speakers addressed the audience which encircled the fountain and spread out into the grassy areas.

Karman Rivers, a 2020 Thomson High School graduate was first to speak. She talked about the unexpected events of her senior year, a global pandemic, shortage of toilet paper, and the loss of more black lives.

“I have marched today with the hope to believe that we are on the horizon for change. I believe that George Floyd, Ahmaud Arbery,  Breonna Taylor, and all the others have not died in vain,” Rivers said.

She said through the years there have been many calls for change.

“But this time, it feels different,” she said.

“Collectively, here is what we have to do.” Rivers said. “We have to continue to love one another. We have to make our brothers’ problems our problems and our sisters’ dilemmas, our dilemmas. When one person hurts, we all hurt.”

Devin Pinkston, a THS grad who is now a junior majoring in political science at Morehouse College, followed Rivers.

“I’m glad to have this opportunity, but saddened by the occasion. It reminds me of the Israelites — bound in slavery, led to freedom,” he said.

He shared the story of Nehemiah going to Jerusalem.

“He knew without a shadow of a doubt that Israelite lives mattered. Not because they were more important, or more deserving of attention, but because they had been harmed and needed help,” Pinkston said.

Pinkston said Nehemiah, if alive today, would not focus on Snapchat or social media posts.

“My Bible tells me the first thing he did was pray,” Pinkston said. “Prayer warriors, it is time to work.”

Pinkston talked of the Declaration of Independence and how it proclaims “all men are created equal,” and how the pledge of allegiance contains “one nation, under God, with liberty and justice for all.”

“Thomson, I’ll tell you what — it’s a shame that the American government has a different definition for the word of ‘all ‘ than the Websters Dictionary,” he said. “If I have to protest to become part of that all, I will do it.”

Pinkston said if he had to vote someone out of office, had to run for office, or has to have uncomfortable conversations to become part of that all — he will do it.

After Crenshaw’s trombone solo, a Thomson High School teacher spoke to the crowd.

Rebekah Stephens talked about her initial trepidation for public speaking, but she said she then thought about the faces she sees in her classroom every day.

“I thought about the lessons that I try to teach about equality and justice — what the world is, and what it should be and how we go from what it is now, to what it should be,” Stephens said. “The more I thought about it, the more I realized what kind of hypocrite it would make me if I was willing to stand in my classroom and give those lessons and say those things, but I’m not willing to stand up in my community, in my hometown, a place where I grew up, with people that I love, that I teach every day. What kind of hypocrite would that make me?”

Stephens said the sadness and rage she has felt, over the past 11 days and really the last several years, has made her come to understand what injustice really is.

However, she said her parents taught her not to be that way.

“Our colors don’t make us different in our worth. We are all worth the same, the outside doesn’t matter, it’s the inside. It’s what you do as a person,” she said.

Stephens said the first time she saw the George Floyd video, and heard him crying out, she was enraged.

How Trump made the decision to commute Stone's sentence

“So many that stand out here with us right now, could be in that position, like that,” she said.

She said she had sat and cried, and said it was almost more than she could handle. But, she turned that sadness and rage into a determination for change.

“Now, I will not sit back down. I wont,” she said.” We have to bring awareness. I have a determination to see that black lives matter as they always should have and as they always have to us.”

“This time make it real, make it last,” she said.

Stephens said this is not a black versus white problem.

“It is a system problem and the system is broken,” she said.

“Today we stand here as determined examples of what it means to combat institutional and systematic racism, police brutality, and an unfair and politicized justice system,” Norris said.

He said there is hope for a new chapter, as he pointed out how groups are protesting in every state and even in other countries.

“This is no longer an American issue. It’s a global issues. All lives can only matter, if black lives matter,” he said.

“Our lives are not for the count of the coroner, they are not for the closing of caskets, they are for life, and love, for strength and greatness and it is going to take you white brother, and you white sister, and you black brother, and you black sister, to join together and say no more will this nonsense be let in our land,” said Norris.  “We’ve come too far, too many times to only be set back with the ignored cries of injustice.”

Crenshaw performed again, then his wife Melody told the crowd why she planned the march.

“Remember it all the time, take it to heart. You were part of something great,” she said.

Crenshaw voiced her appreciation for local law enforcement, the Rev. Fred Favors, and all the people who helped make the Stand By Me March possible.

Rev. Favors concluded the event on the courthouse steps with some comments.

“It does my heart proud to see all of this that has taken place, this leadership, and all of you being here,” Favors said.

He reminded attendees of the 2020 Census.

“This does not matter, if you don’t make sure that you’re counted in the 2020 Census,” he said.

He also reminded all to vote in the primary election, which was Tuesday of this week.

Favors then addressed how some in the community were not happy about the march being planned.

“There was a group that did not want this to take place because they just figured you would be violent, tear up the town, mess up the courthouse,” said Favors. “But we be here.”

“This courthouse and that building don’t belong to any one group of people. This is all of ours,” he said.

Favors also encouraged attendees to take a hot dog, grab some bottled water, and be sure to pick up any trash and place them in the proper receptacles.