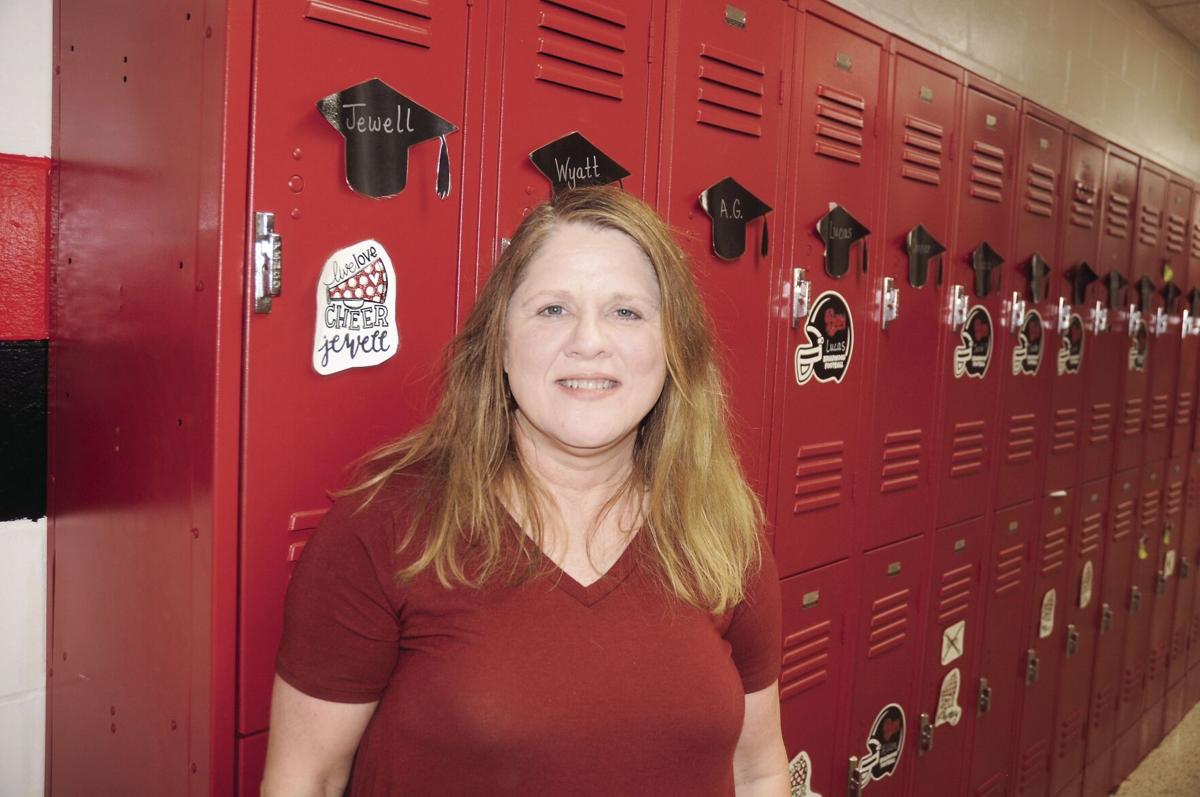 Lee Robinson walks the halls of Briarwood Academy as a high school teacher, but when the school first opened its doors in 1970, she was the youngest member of the first grade class. 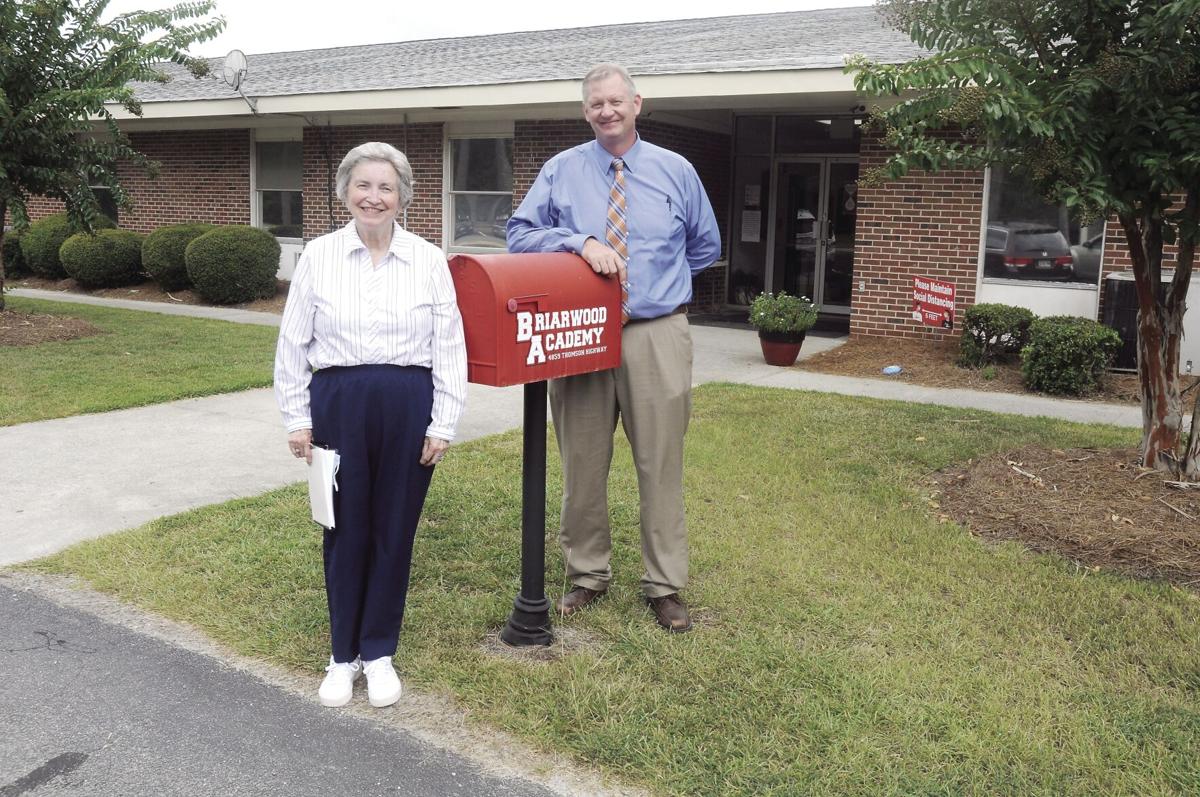 Gayle Hammond is shown in front of the school with Headmaster Clayton Parrish.

Lee Robinson walks the halls of Briarwood Academy as a high school teacher, but when the school first opened its doors in 1970, she was the youngest member of the first grade class.

Gayle Hammond is shown in front of the school with Headmaster Clayton Parrish.

Lee Robinson, high school English teacher at Briarwood Academy returned to school after Labor Day, and it brought back memories.

Briarwood Academy started honoring its upcoming 50th anniversary about two years ago as part of a capital fundraising campaign. But last week, the big day arrived.

In 1970, the school was actually late in starting the inaugural school year.

“The school opened kind of late because they were finishing up construction so we didn’t start until Sept 8,” said Robinson. “I was actually the youngest student at Briarwood on the first day.” She had just turned 5.

She remained at Briarwood through the third grade, then attended a McDuffie County school until the third nine weeks of sixth grade. She then returned to Briarwood and later graduated in 1982.

“So several of my classmates were the first group to go all the way through,” she said.

The Briarwood grad soon returned and taught from 1987 to 1990. She again returned to teaching at Briarwood in 2017.

She is not unlike others who can remember the early days of Briarwood Academy, including the current headmaster.

Headmaster Clayton Parrish, however, remembers Briarwood from a different perspective.

From third grade up as a Wilkes Academy student he competed against Briarwood athletes and can remember coming to games at Briarwood.

“We played Briarwood but I don’t necessarily know that we were rivals, they beat up on us pretty good,” said Parrish. “I always had a good respect for the school.”

He is the most recent in a long line of Briarwood headmasters and served as principal under the John Hammond, headmaster for nearly two decades — 19 years.

How has Briarwood changed through five decades?

“If you look at year one, when I was here in first grade this building was it. Everybody, one through 12, was in this building. We didn’t have a gym. The closest thing we had to anything athletic wise was the tennis courts because football didnt start until ‘72,” Robinson said.

She explained that basketball was a sport, but the school did not yet have a gym.

What is it that makes Briarwood special?

Robinson said on a recent social media post about the school one of the students put it in very simple terms.

Robinson said the kids can go all the way through school, from kindergarten to graduation, they gel as is a family. Many families even are on the second and third generation of being a family

“It’s very generational too,” Parrish said. “With different generations they all kind of mix together. When you have those memories it just helps tighten that bond that is here,” said Parrish.

“I’m now teaching kids of students I had here when I was here 30 years ago,” Robinson said.

Hear Trump vs. Biden on police reform and accountability

“I’m really careful what stories I tell about mamas and daddys,” she said with a laugh.

Around the community, it is not uncommon to see Briarwood students and public school students be friends since through the years some transitioned from one to the other.

Parrish said he noticed in his years that years ago there was a divide in the community between public and private schools but sees that has changed somewhat over time.

“We both need each other, we both need education in this area to be strong,” said Parrish.

He said it is good for the community as a whole when private school and public school kids interact and are friends.

What’s the future of Briarwood?

Parrish said the school is poised for growth, yet at a very good number of students right now.

“We pride ourselves on academics and the caliber of students that we put out so we want to make sure we’re increasing that and not taking  a step back,” he said.

He wants to provide opportunities, but financially the school does not have grow.

“If we grow we want to make sure we grow in the right direction,” Parrish said.

He said 30 minutes down the road, a private school education can cost three to four times as much annually.

“We fit where we are — a rural, small, private school that is close knit and family oriented,” he said.

“I still think the thing that is always tried and true is the strong Christian faith that we have in school and the strong family atmosphere that we have. Neither one of those has changed and those are things that do not need to change. We are going to prepare our kids for college in a safe, Christian environment,” Parrish said.

Another long-time fixture at Briarwood Academy is piano teacher Gayle Hammond, who was married to Headmaster John Hammond.

“I just love it and I can’t quit coming so I just keep coming as long as they will let me,” she said.

At first she would go on class trips with her husband and the students. Eventually, he encouraged her to come teach piano at the school.

“It worked out really well. I could get the children and the teachers were really supportive,” she said.

She also has another view of Briarwood, that of a mother and grandmother of former students.

She said what makes Briarwood special are the people.

“It’s such a family oriented school. Everybody cares and it’s not too big, but its big enough for everybody to know one another,” she said. “I feel like its a family.”

She also sees the benefit of teachers seeing a child grow up, all the way from pre-k or kindergarten to becoming a senior and graduating.

The original school building was renamed the John and Gayle Hammond Middle and High School in recent years.

“We were a team, but it’s really about him,” she said.